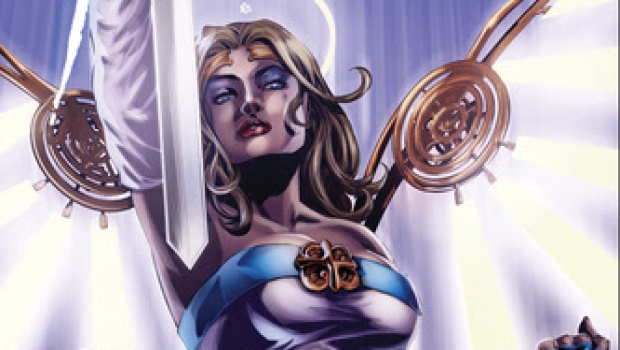 The Maid of Orleans Rises from the Ashes: Joan of Arc is back in her ongoing series! After her defeat at the hand of Lucifer Joan returns to the Babylon Hotel. She discovers that her friends were hiding the Ark of The Covenant and other ancient artifacts. In order to protect them Joan leaves Las Vegas with them and goes into hiding. In the tradition of high quality story telling of Penny for your Soul with an added hint of archeology.

Joan of Arc: From the Ashes Trade: The Joan of Arc volume 1 trade is available for reorder.

Ursa Minor #6A
Horror at its Bloody, Gory Best: Naomi is in a repeating cycle of self destruction and April must try to stop her because if she succeeds in her quest the Vampires win!

The Smash Hit Journey continues: She has been everywhere, seen everything and talked to everyone. Now it is time to tell her story. Shahrazad involves herself in the Indian Wars of 1876 on her epic quest for redemption and revenge.

The Legend of Oz: The Wicked West #23A

The Epic Tale Within Oz Continues : As the Nome King continues to strengthens his position on top as the new ruler of Oz, Princess Ozma is gifted the missing piece to her emerald Pistol, but is she ready to pay the cost for it?

The Legends of Oz: Tik Tok and The Kalidah #3B

The Adventures of Tik Tok and the Kalidah: Celebrating the 100th anniversary of the book Tik Tok of Oz! Tik Tok and Kali come to the end of their journey, hoping their sacrifice will one day save Oz.

Knightingail: Dawn of Destiny #1A

Magic, Centurions, Fortresses, and Friendship: After a Year of Brutal Warfare, Centurion Kightingail decides to take the offense against Luceus’ main base. But first, she and he Centurion friends must defeat the defenses at Fortress Formido. Knightingail is more confident than ever, but there is a new evil that lurks within the depths of this fortress.

Joan of Arc: From the Ashes Trade

Heaven, Hell, Lucifer, and Mary: After her transfer to the Babylon Hotel in Las Vegas Joan of Arc finds out Mary Magdalene is in hell. Joan gathers allies and descends to hell to rescue her but she receives information and experiences a battles she never expected.