Review: Big Trouble in Little China Volume 3: The Hell of No Return - Comics for Sinners
Reviews 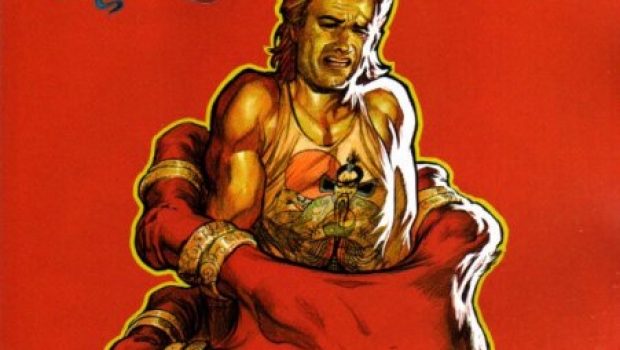 Review: Big Trouble in Little China Volume 3: The Hell of No Return 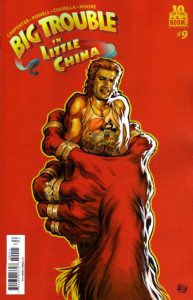 The cover boasts a story from none other than John Carpenter, the man who wrote and directed the original movie, with Eric Powell. And it literally is Jack and Dave’s Bogus journey as our over the top hero winds up in Hades with his arch-enemy. What is the first thing these two dunder heads do while burning in H-E- Double tooth picks? Why they argue over weather or not Miao Yin was in love with Dave or not. This issue promises to be the laugh riot from hell from page one on.

Eric Powell loves creating humorous situations for Jack Burton to try and escape from and he keeps his tongue planted firmly in cheek, not just on every page, but in every panel on every page. After they argue about Miao Yin’s affections some demons show up that want to eat their innards! then we cut to the mortal plane. Jack is sprawled out on the ground covered in blood. Not alive. Egg Shen requests an audience with Tai Sui Laohu but is turned down. Then he reminds them that Jack is the one that defeated Lo Pan and he gets in. Can Tai do anything for an already deceased Jack Burton? read on and find out.

Brian Churilla has an over the top cartoony style that fits this story to a tee. His expressions are eagerly exaggerated and he is no stranger to the underworld, having drawn issues for the Hellbreak series. with Cullen Bunn. his art is nicely hypnagogic and he renders each element of the underworld with a comic flair that coincides charmingly with the words that Powell put to paper. If your looking for lots of laughter with your action then the Jack Burton universe is your cup of Ginseng tea.

The way the cover is drawn by Eric Powell brings the reader into this Torrid Tale of Torture with a hard red background that tells us that Jack is in Hell. A giant demon has Jack literally in his grasp and a prophetic review from Fangoria tells us that “It honestly couldn’t have come out better.” A perfect compliment to what awaits the Big trouble in Little China fan inside.

By the end of this tiny tome we have the forces of mysticism on earth trying to bring Jack back from the dead as well as Jack himself trying to negotiate his way back to our mortal plane with any demon that’ll listen to his pleas. Will either be successful in quickening Jack’s mortal soul and bringing him back to our topsy turvy dimension? As the old cliché says: Be careful what you wish for, you just may get it! 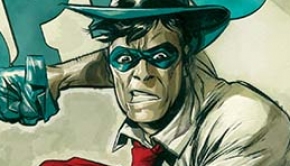 Review: Will Eisner’s The Spirit #1 →