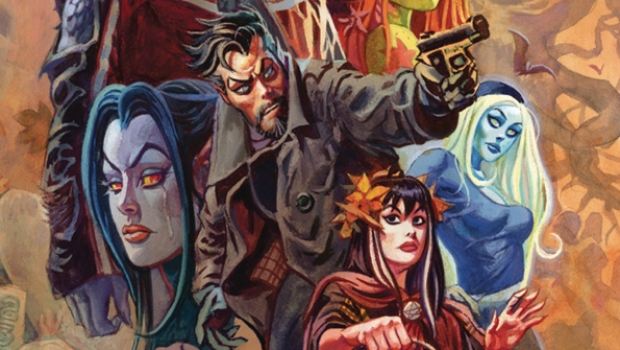 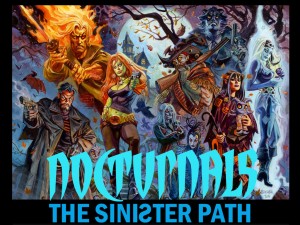 Over two decades ago, five time Eisner Award nominee, Dan Brereton brought us THE NOCTURNALS, a series of graphic novels and stories with a pulp-style blend of Crime, Gothic Horror and Adventure with a twist of Halloween. Following the adventures of Evening, AKA Halloween Girl, a youngster gifted with paranormal abilities, and her father, Doc Horror, occult adventurer and scourge of the criminal underworld. With a crew of night creatures as allies, Doc and Eve are the only force standing between the sleepy town of Pacific City and the predatory forces lurking in its shadows.

2017 will see a new original Nocturnals Graphic novel, THE SINISTER PATH, a 64 page story that promises to be the scariest, hard-boiled tale yet told in their saga. It can be found in the Diamond Previews for June 2017 release here.

THE STORY
Evening’s ability to attract and communicate with spirits has been part of her as long as she can remember. Now Eve has begun to attract an element of the spirit world she’s totally unprepared for as alien phantasms from the nether realm terrorize her as she sleeps. While attempting to make sense of these unwanted new abilities, Eve comes into possession of “Jammybottoms”, a doll unlike any in her collection of possessed poppets. As Eve discovers the unsettling connection between her night terrors and the new doll, Doc Horror investigates the bowels of a haunted Victorian estate, making an awful discovery which could spell their doom.

The death of the powerful and mysterious Judge Hemlock opens the door to one macabre revelation after another, as Doc Horror, spooky daughter Evening, and an armed revenant called the Gunwitch, investigate a haunted house enshrouded in the occult. What the Nocturnals find in the dungeon-like basement – and the toy-filled attic – is only the beginning of a wild and deadly hunt, as the monstrous Hemlock children are once again free to roam the countryside, seeking revenge on anyone unlucky enough to cross their sinister path.