Since I started publishing comic books over 12 years ago, I did so with a series called the “10th Muse“. It launched as the 6th highest-selling comic Image comic and it was just insane for an unknown Image property to do so well. It was November 2000, and if Battle Chasers did not come out that month it would have been #5.

When I created the character, I wanted to do something with a strong independent woman that could kick a lot of ass. I hired Marv Wolfman to write the scripts for the first 10 issues of the series and hired Top Cow artists Ken Lashley and Randy Green to help develop the look.

Randy Green, who was doing Witchblade at the time, developed the actual look and feel of the character. Ken Lashley brought his own style to the character too. It was a perfect team.

After four issues we ended up getting Roger Cruz of Uncanny X-Men fame to take on the book to do crossovers with Savage Dragon and Tellos. The five issues Roger did were my personal favorites.

We did TRY to tone down the T&A in the books. I grew up with a huge respect for women and wanted this book to be for not only men to love, but something that women could identify with as well. If you look at books like the aforementioned Battle Chasers – they went to do more T&A on purpose; Joe Madureira pushed the envelope with Red Monica.  I am all for that – but for the 10th Muse and Isis, I wanted to tone that down and we did.

Case in point, I remember doing a crossover with DemonSlayer and Avatar showed me the covers for the crossover (it was insane – there were like 10 of them). There was one I vetoed off where the 10th Muse  was being spanked by DemonSlayer… but I think they ended up doing it anyway. [C4S is running that visual discussion here]

We used Rena Mero a.k.a Sable from the WWE to be the photo model. There were lots of celebrity type fiction books back then, like Alley Cat, and we decided to get in on the fun. We got to go through tons of Playboy photos to put her in the costume. It was a blast !!!

Rena Mero was the marking tool we used to get on Entertainment Tonight, but we also made versions of the comic book for the traditional comic book reader who did not care about the celebrity. It worked because of the great illustrated covers by Randy Green, Andy Parks, Ken Lashley, Roger Cruz, Stephen Platt, Keu Cha and more.

When we moved the character to Alias, we decided to work with Cindy Margolis to play the part of the 10th Muse. She was also great to work with!

Since her November 2000 debut, 10th Muse has become an icon in the independent comic book world and I have a lot of pride over it.  We have done crossovers with Shi too which was exciting. And we’ve got a tv show in the works now too. So, as long as I am doing comic books there will always be a 10th Muse! 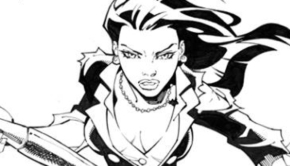 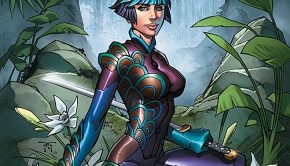