C4S highlights the best (so yes, only the ladies!!) of Imag..." /> C4S Highlights Image Comics Solicitations For December 2013 – Comics for Sinners
Analysis 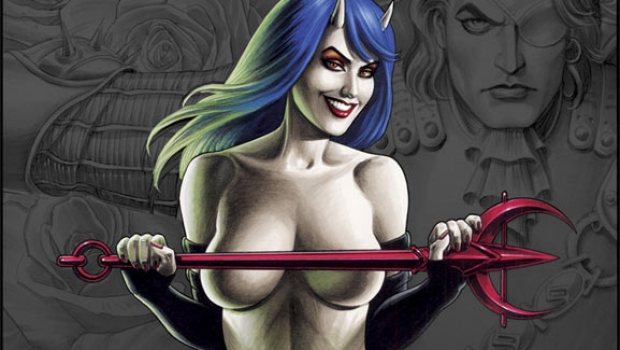 C4S highlights the best (so yes, only the ladies!!) of Image Comics November 2013 solicitations, to be pre-ordered in the October Diamond Previews.

The BLACK KISS 2 CHRISTMAS SPECIAL – because nothing says “holiday fun” like an endless stream of incredibly nasty revenge sex.

“MOTHERS OF REVOLUTION,” Part One

Long ago, a child fled a revolution. She stole another’s name, betrayed a king, took his country to war, and turned sister against sister—all to reclaim her Father’s throne. She is Raisa Vasilyeva, illegitimate child of a Czar, Queen of Mitteleuropa, and now… destroyer of all things. The Sisters Grey return for the final devastating chapter of CARBON GREY.

JOSEPH MICHAEL LINSNER writes and draws two stories featuring characters that his die-hard fans have been asking about for years. In “Hell Is Waiting,” Sinful Suzi learns a lesson about the wages of sin. And in “Burning Roses,” Obsidian Stone loses an old friend and welcomes a new demon. This guilty pleasure is a long-overdue return to the B&W short stories that LINSNER started with in CRY FOR DAWN. Because if you are going to sin, then sin boldly!

PEEK INTO THE PROPRIETARY BLACK BOX OF APHRODITE’S MIND!

The cybernetic assassin Aphrodite IX has survived the rise and fall of countless civilizations. What sacrifices and tragedies has she seen that have been erased from her memory?

To wage war with the Darkness, Rapture bearer Tom Judge will need to amass an army of Artifact bearers to back him up.

Alex struggles with figuring out what to do with Ada, his new android, before anyone finds out about her. She is not what he expected.

Holy vengeance can be a real headache, but it’s so much worse when it’s coming from a fifteen foot tall lady troll who’s just lost her dad. In this blood-splattered issue, the Rat Queens find out that every action has some sort of hilariously brutal consequence!

Changing the future is hard to do. Sparks fly when DaYoung becomes Most Wanted in two different New York Cities. Police in battling timestreams — 1986 and an alternate 2013 — want to get their girl. But bringing her in is going to take a coordinated effort from a mysterious player who straddles both worlds.