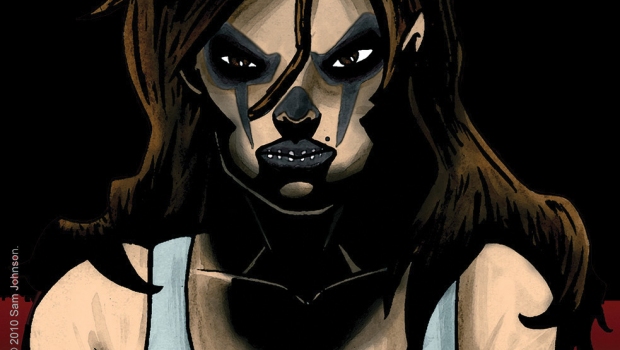 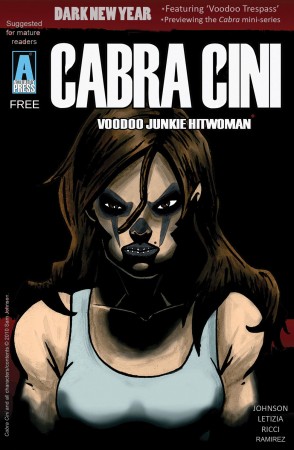 Following a number of anthology appearances, cult character Cabra Cini is graduating to her own mini-series, and this is previewed in Free Digital Comic Cabra Cini: Voodoo Junkie Hitwoman – Dark New Year; which also re-presents ‘The Voodoo Lady’s debut story.

“We’ve been working on the mini-series for some time,” says Cabra’s creator/writer Sam Johnson, “and with the art underway on the final story, it’s time to introduce Cabra to a wider audience with ‘Dark New Year.’ I hope you’re ready for what’s coming!”

‘Voodoo Trespass’, Cabra’s debut story, throws us headlong into her twisted world, when she is hired by bereaved parents to take out the teenage boy who killed their daughter, ‘playing vampire’. Cabra utilizes her magik to access a dimension known as ‘The Infinity’ – Limbo’s ‘crazy cousin, locked away in the attic’ – which, for those who trespass upon it, can serve as a dimensional gateway between where they are and wherever they want to go. Though with what The Rook, the ruler of The Infinity, throws at its abusers, the journey can come at a monstrously high cost.

Beyond the horrors of The Infinity, we meet some of the characters who will also feature in Cabra’s forthcoming mini-series, including her friend-with-benefits Geoff; her pet werewolf El Hombre Lobo; and insane Neo-Nazi White Out and his lobotomized butler Chives…

“Cabra has broken free of her life as a beaten-down hooker and is a badass, independent, strong woman,” continues Johnson, before concluding ominously, “With what’s coming her way in the mini-series, she’s going to need to be.”

Written by Johnson (Geek-Girl, The Almighties), illustrated by Bruno Letizia, Nathan Ramirez, and R.D. Ricci (Ligeia the Vampire, Reborn, The Shadow of Rivene) , published by Actuality Press and suggested for ‘Mature Readers,’ the 17-page Cabra Cini: Voodoo Junkie Hitwoman – Dark New Year is Out Now, and available FREE at www.actualitypress.com and www.drivethrucomics.com