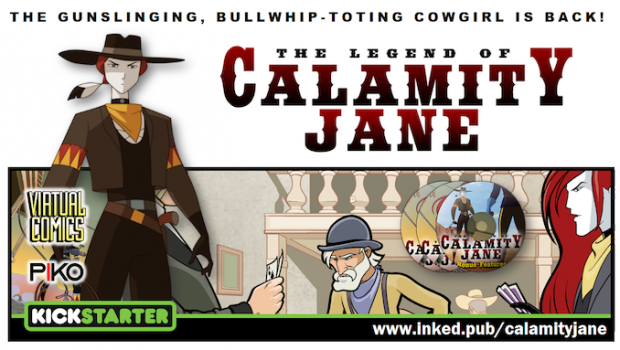 The Legend of Calamity Jane debuted in September 1997 (Warner Bros. Studios) as an Old West–
themed animated series appearing on its Kids’ WB slate of children’s programming. A co-production of
Warner Bros. TV Animation with France-based Gangster Production, Contre-Allée, and Canal+, and set in
and around Deadwood, South Dakota, in the 1870s, it presented a heavily fictionalized, heavily stylized
take on the life and times of the real-life Martha Jane Canary, a gunslinging, bullwhip-toting cowgirl who
was famously known around the world as “Calamity Jane.”

KICKSTARTER CAMPAIGN OFFERINGS!
Two separate versions of the DVD 25th anniversary collection box set will be offered. One regular
edition box set will include all 13 episodes on two discs with exclusive new original artwork. The second
version is the Special Edition box set which will feature a Kickstarter Exclusive unique box art sleeve, all
13 episodes on two discs, and the third disc with bonus features, including a 30-minute video featuring
the lost official Calamity Jane Flash Website as a video walk-through, and the original Calamity Jane
Autobiography voiced by Barbara Weber Scaff. We also have some exciting stretch goals that will make
it to the bonus features if unlocked.

X-men Novelist pens the NEW The Legend of Calamity Jane: The Devil Herself
This new action-packed horseback-straddling revolver-holstering adventure puts sexy back in the reigns
of Calamity Jane in a brand-new 28-page, full-color comic revival written by Steven A. Roman (X-Men:
The Chaos Engine Trilogy, Final Destination: Dead Man’s Hand) and illustrated and colored by Eliseu
Gouveia (Stargate Universe: Back to Destiny, Lorelei: Sects and the City) finds Jane on the hunt for a
stolen relic: a gun that belonged to her old friend Wild Bill Hickok. But more surprising than the identity
of the gun’s current owner—a series villain from her past—is the even bigger mystery. How can Calamity
Jane still be alive today and not look a day older than she did in the 1870s?

One great DVD box set, TWO ways to own it, and ONE BRAND NEW Calamity Jane comic adventure that
picks up directly after the events of the series animation. It’s what every Wild West fan needs for their
collections.