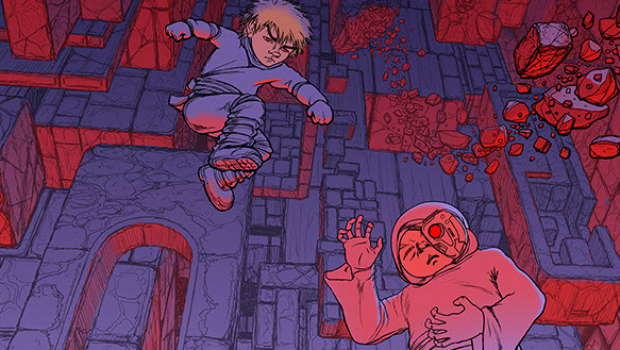 Caliber Comics announced the release of 4 graphic novels in Diamond’s January solicitations for delivery to retailers in March 2018. These books are currently available to pre-order through Diamond Previews, so run to your local comic book heroes/dealers!

Noted comic writer and illustrator Don Lomax (Marvel’s The Punisher, Caliber Comic’s Vietnam Journal) has teamed up with Police and Security News magazine to produce a series called “Above and Beyond”, real life depictions of heroic acts by law enforcement professionals.

Contained within these pages are just a few stories of these individuals who have demonstrated selfless bravery and heroic action under the most difficult circumstances and gone above and beyond the call of duty.

October 30th, 2151. Devil’s Night.
Traditionally the night before Halloween has long been dedicated to spray paint and fire, to the destruction of property for its own sake. And the impulse behind this frenzied “holiday” is alive and well in the 22nd century. But mischief in the futuristic Age of Nanotechnology is complicated. For young vandals Bardo, Shiyu, and Dwyer, visionary tactics may not be enough for perilous alchemy is required. And unleashing such power will bring enemies and open an abyss that could swallow its makers whole!

An action/adventure tale of the French Legionnaire soldier, Battron, “a man without a country,” who is involved with the liberation of a freebooting French ship, the Martel, from a heavily guarded Vichy French port during World War II. The Allies want the ship destroyed; the Germans have sent serious firepower to save it and keep it afloat. But a critical security leak in British intelligence could jeopardize not only the mission but Battron’s life.

The year is 2050. The United States has suffered from extreme polarization. Factions separated by race, politics, religion, and special interests have turned the melting pot into a jigsaw puzzle. The power of the federal government has been cut and now there are 50 different “state” units of power, each pushing their own agenda. The result is an even greater division among the classes. And in this future a wanderer walks the night, possessed by questions, searching for a woman named Opal, who may have answers. Tatters, as he is known, is guided by the suggestions of a ghost named Saltev, whom he must avenge. But, to do so, he must infiltrate a powerful and mysterious organization called Phase Ten.

The acclaimed comic book war series from Don Lomax, nominated for a Harvey Award, is now presented as a series of graphic novel volume collections.

Vietnam Journal is a look at the Vietnam War through the eyes of war journalist Scott Neithammer, a freelance reporter the troops have nicknamed “Journal.” As an embedded reporter, Neithammer has a single minded focus and obsession to report the controversial war from the “grunt’s” point of view and to hell with the consequences. It chronicles the lives and events of soldiers on the front line during the Vietnam War.