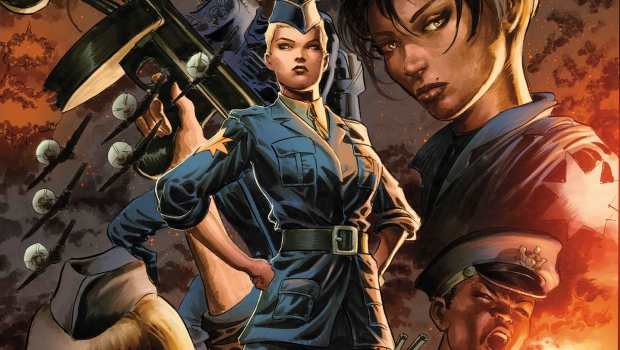 They are the elite. The best of the best. And this June they are rocketing into Secret Wars for a high-flying, explosive adventure. Today, Marvel is pleased to present your first look at CAPTAIN MARVEL AND THE CAROL CORPS #1 – a brand new Secret Wars series from Blockbuster Captain Marvel creative team Kelly Sue Deconnick and David Lopez along with Marvel newcomer Kelly Thompson! Welcome to Hala Field, where if you’ve got the guts – if you’ve got the moxie, you just might make it as a member of the Carol Corps. The chosen few, the proud, the brightest pilots of all. The Carol Corps soar high above Battleworld, protecting and defending Hala Field from the worst Battleworld has to offer. And the Carol Corps needs people like you! So put on your uniform and strap in for the most high-flying, action packet Captain Marvel series fans have been clamoring for. Prepare for takeoff as CAPTAIN MARVEL AND THE CAROL CORPS #1 comes in for a landing this June!