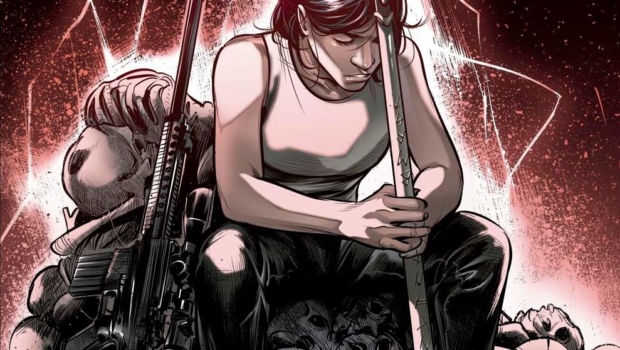 This is what writer Colleen Douglas tells us, in a sneak peak of her new title at Amigo Comics.

And she loves spilling her beans all over the place so here goes nothing!

“Carmine’s “people” are a race of Antediluvians and their seals give them long lives as well as “powers” in Carmine’s case her seal is The Lightning Beast among all others it’s considered the “Queen” seal. The thing is the seal chooses the bearer. The current Queen Petra (she looks like a kid, don’t be fooled) her seal was the strongest ever seen it’s called “Juggernaut” it gives her strength but it also inhibits her aging.
She has two other siblings: Trisha who is older (she wants to be Queen) and her seal is a Dark Infernal – Like the Egptian God Anubis- so her weapon is a Khopesh, she is also considered the Mother of Lost Souls as she tends deal with youngster who are born deformed or severly diabled. Her brother is Juda- his seal is Leviathian and he tends to look a bit snake like. Ipos is the Queen’s right hand man. He trains Carmine and his seal is Phoenix Gaze, he can turn a person to ash.”

And look… there is more! Colleen continues: “There are other players Bunny/Anemini/Miranda and Kran. Anemini is Carmine’s sister who Trisha murders for her seal so she could make a hybrid, Bunny is Anemini’s daughter, she is mute but bears a Seraph. Miranda is Anemini’s adopted daughter who betrays her because she was jealous and Kran is a “curator” and a jack of all trades. Kran and Miranda are human. So it’s a dark family saga. Oh and Carmine’s weapon in the House of Cochineal is a Hephaestus staff, after the blacksmith to the Gods who forged Zeus’ lightning bolt.”

Well, we at C4S are very curious to see her and her fellow artists hammer this out in a mere 5 issues, but feel confident this is going to be one series that will stand out on the shelves!