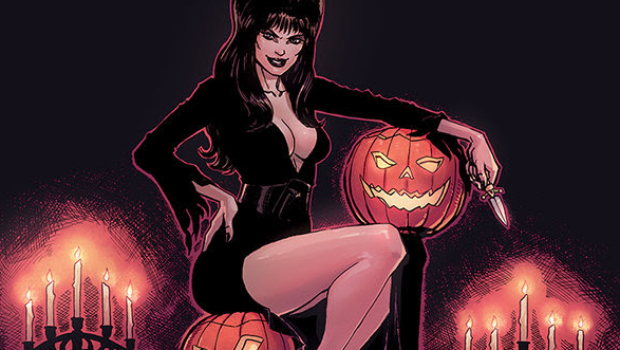 No tricks, only treats – Dynamite Entertainment is taking Halloween by storm this year delivering five standalone issues from fan-favorite series Vampirella, Red Sonja, Bettie Page, Elvira and Army of Darkness. Each Halloween Special will feature 40 pages of hair-raising fun for readers looking to get in the spirit.

“Halloween and comic books go hand in hand. Everyone loves a good scary story in late October and we’ve always wanted to do a big program for all our major characters,” said Nick Barrucci, CEO and Publisher of Dynamite Entertainment. “This is a great chance for readers to get five great stories for themselves or to give to their friends for the holiday.”

“Dynamite is very excited to be presenting these titles for Halloween this year. The talent involved is absolutely incredible and bring unique voices to each story,” said Dynamite Entertainment editor and interior artist Anthony Marques. “To have legendary writers such as Tom Defalco and Scott Lobdell involved is a testament to Dynamite’s relentless pursuit of bringing top-tier talent into the company to help create stories that will leave fans excited and wanting more.”

Army of Darkness Halloween Special: When a crazed tour guide raises the spectral remains of the galleon that brought the Necronomicon to America, Ash finally meets the one thing he hates more than Deadites – ghost pirates! It’s chainsaws and boomsticks against cutlasses and muskets, and if Blackbeard’s men can’t have their treasure, the Promised One’s head will have to do! Written by Chad Bowers, Chris Sims, Benito Cereno with artwork by Eoin Marron and Anthony Marques.
Bettie Page Halloween Special: Bettie Page is back! Is a Boston artist in contact with godlike space invaders, or is he just nuts? Bettie brings the love, and the craft in the latest chapter in writer David Avallone’s Secret Diary of Bettie Page! Written by David Avallone and Leah Williams with artwork by Julius Ohta and Fernando Ruiz.

Elvira Halloween Special: Everyone’s favorite Mistress of the Macabre, Elvira is spinning her wheels hostessing horror film festivals at the local drive-in when she discovers the opportunity to get in good with George Rottmero, producer of the greatest, grittiest, most realistic horror movies ever. When she discovers the grave secret behind Rottmero’s success, her dreams of super stardom might become deader than her undead co-stars!! Written by Dan Parent, Fernando Ruiz, Scott Bryan Wilson with artwork by Dan Parent and Fernando Ruiz.

Red Sonja Halloween Special: During the Festival of the Dead, an old woman hires Sonja to find and save her son from a terrible evil. What Sonja is not told is that this terrible evil is the curse of lycanthropy… can Sonja defeat a werewolf during one of the longest and most magic-filled nights of the year, or will skill and luck finally fail her? Find out in RED SONJA: CURSE OF THE WOLF! Written by Erik Burnham and Tom Defalco with artwork by Tom Garcia and Anthony Marques.

Vampirella Halloween Special: Where Vampirella comes from they don’t celebrate birthdays — so she had to choose her own. Is it any wonder she picked Halloween night? Unfortunately, her simple celebration is interrupted by — you guessed it — one of those pan-dimensional demonic invasions that often seem to take place on All Hallows Eve! Written by Scott Lobdell and Blake Northcott with artwork by Rapha Lobosco and Anthony Marques.