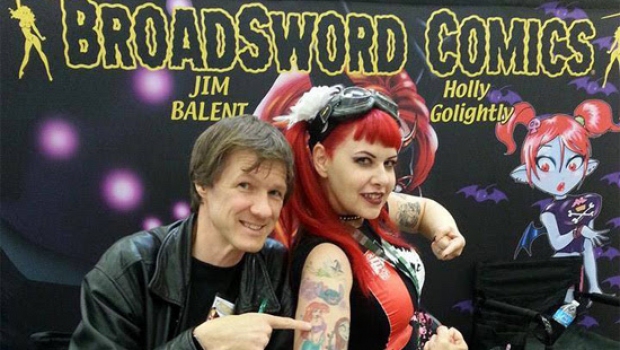 March 15th 2014 will be our 14th anniversary of publishing Tarot, Witch of the Black Rose and the formation of BROADSWORD COMICS.
One question we are often asked is … did you know that you would be publishing Tarot for 14 years?

To be honest the answer is Yes and No. Yes when we formed the company we had a vision in mind that we would be around as long as we liked what we were doing and the Readers liked what we were doing. So as a long term goal, yes we did think we would be around for a long time.
But if you asked us on day ONE where will we be 14 years from now? There is SO MUCH WORK that goes into ONE comic , that for us to sit back and imagine what it would be like to publish close to 90 issues is mind blowing. But at the same time…VERY EXCITING! So the second part of that answer is No, we didn’t sit down on day one and say where will we be 14 years from now.

We’re here because of our Readers!

Tarot, Witch of the Black Rose has been around this long for a few reasons. One is mainly the READERS. Without them we would have closed up shop long ago.
In fact when we started the company I was told, (By the so called EXPERTS in the field.) that Tarot would not survive past issue three… now, thanks to the support of our Readers, issue 85 will hit stores in March!
Tarot is also a different comic than most. Yes we have action and adventure, but we are not really a Superhero comic, although some of the issues do indeed have Superhero themes. (Like the ones featuring The 3 Little Kittens.)  Tarot stories are inspired by our Friends, Events that happened to us or just meeting people at cons (with a Supernatural  Adventure element  added).
Our Readers range from Comic Book fans, FBI agents, Lawyers, Chefs…Soldiers have brought our books to the FRONT LINES in the Iraq War!
Tarot has a message in all the stories but we keep in mind that it has to entertain first! Each issue has to Entertain and Educate. Those who just want to escape this world can have a good read and then those who want to see the deeper meanings will experience that as well.</td>

What Makes Us Different!

Another difference of the Tarot comic is, there’s nudity in it.  As Publishers, Holly and I are MOST proud of our Female Readers. The Women who read Tarot are strong individuals,
comfortable with their sexuality and see all the messages within the art and story. In fact all of our Readers are very special. Sure, some Readers will pick up the book just for the nudity… that’s fine, nothing wrong with that.
But most will see that  the nudity will represent everything from  Freedom, Power, Vulnerability or Humor.
We do get heat from some people who don’t understand why the main characters in my story are drawn so voluptuous.
Some say the characters are drawn too big…too busty… as though there is an “Acceptable Size”. Well these people are alienating women who are that size! There is nothing WRONG with being that big or that small.
One of the messages in Tarot is about acceptance of ones Body, Sexuality and or Theology (Tarot being a practicing Witch). Many people have come up to us at cons thanking us for creating such a unique book.
In fact we printed a letter from an incredible woman who was battling Cancer and it was our comic, Tarot, Witch of the Black Rose, that helped her accept her body during this intense time. (Her letter is in issue 84 of Tarot: Night of the Krampus). So when I balance out her letter with the small minded comments about how I draw women. It’s no contest…  I win that battle.

Shout Out to the Comicbook Stores!

Another pillar to our success… The Comic Book stores! For 14 years Holly and I have NEVER missed a Deadline. That includes Shipping, Publishing and Advertising.
We know the stores have a lot on their plate to deal with. So why give them one more headache by not having our books in their stores when we said it would be? We didn’t want stores guessing will this book be late or when will it come out?  So for 14 years it has been on time and that is due to a lot of hard work from Holly and Myself.

So yes a BIG THANK YOU to all the stores that supported our comics!

And finally we do this because we come from being COMIC BOOK readers.
We love Comics. We grew up reading Comics. We wanted to be Comic Book artists!
Our goal was not to publish 4 issues and then go out and try to sell it as a Movie.
We are a Comic Book company first.
BUT, if Guillermo Del Toro or Peter Jackson want to make a movie out of it…Great!
As a priority for us… Comics come first, Movies second.
And yes we have turned down movie offers, mostly because they didn’t have the heart of the book in mind.

Mostly we do this because it’s FUN!
And thanks to everyone for making the fun last these 14 years!!! 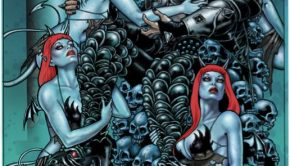