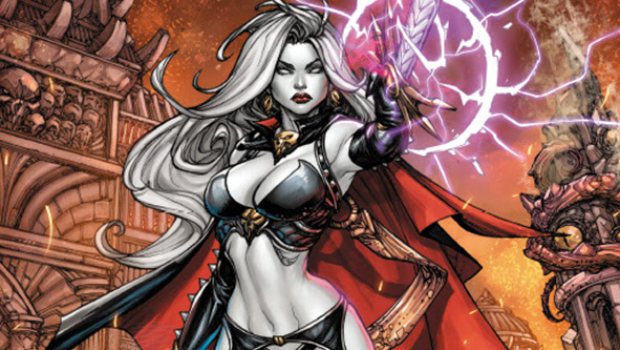 On the day of a new Kickstarter launch, veteran comic book creator Brian Pulido reflects on how far his Scottsdale, Arizona based company has come in three short years. Back then, he just settled a lengthy and costly lawsuit to regain ownership of Lady Death, his signature comic book character. He was at a crossroads. What was next?

Lady Death, a supernatural anti-hero who fights evil was popular in the 90’s but could she be relevant today and how would Pulido reach today’s readers? Looking at the comic book distribution landscape, Pulido concluded his best shot was bypassing the traditional channels and re-launched Lady Death through Kickstarter. The gamble paid off. His first campaign raised $76,553.

“I credit our fans who we lovingly call “The Fiends,” Pulido says. “It’s all their fault” Pulido smiles. Pulido has grown his company, Coffin Comics, to a level not seen by most creator-focused, independent comic book publishers. He’s opened a global headquarters in Mesa, Arizona that houses a distribution center, offices, and soon a broadcast facility, a Lady Death museum and company store.

On the horizon are comic book projects featuring new characters spinning out of the Lady Death “Darkverse” and licensed items including statues and action figures. “This is nothing short of a re-birth for Lady Death and for me. I am humbled and grateful to our supporters. There are no middlemen. It’s just the fiends and I.”