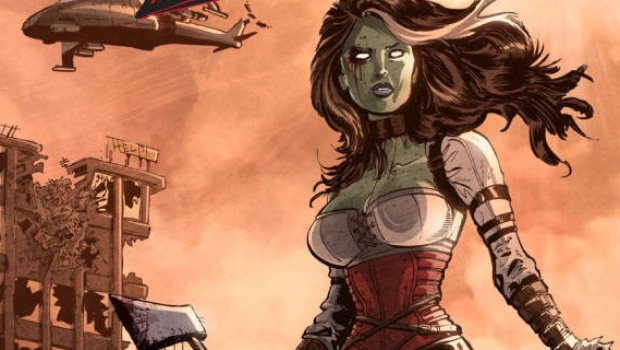 Comic industry veteran M. Christopher Thompson and a band of cohorts are launching the first in a number of creator owned titles through Kickstarter. The first title; MONSTRA: ZOMBIE DESTROYER! debuts in April.

MONSTRA: ZOMBIE DESTROYER is a 125 page full color graphic novel printed on the highest quality glossy paper stock utilizing the pinnacle of current printing and production methods.
They will also produce a limited deluxe hardcover of the graphic novel as well as a 11 x 17 sketchbook featuring pencil art from the first issue and concept art.
Multiple packages will be available through Kickstarter including retailer focused bulk copy discount packages as well as fan friendly collector packages relating to the new title.

The story involves a sentient zombie and her slacker boyfriend at the outset of the end of days. The government has contained an initial outbreak of infected undead . A widespread zombie outbreak has been averted through military involvement and the establishment of quarantined areas around the country. Small sub-sections of the human population have been discovered to be immune to the bites to varying degrees. This results in humans with this immunity being highly sought after for military service and biological testing. Monstra is one such human who has a partial resistance causing her to be half zombie half human. She joins a military outfit with her boyfriend which is assigned to eradicate zombies who roam the quarantined areas.

This title will be one of numerous titles which occur in a self-contained new comics universe initiative called UNIVERSE BORN. The writer has been creating these characters for an alternative comprehensive comic book world over twenty years.

Join our battle at: http://www.kickstarter.com/projects/1420428366/monstra-zombie-destroyer