Justin Gray wrote a cool miniseries for Moonstone Pubs, called “Vengeance Of The Mummy”.
Artist Eliseu Gouveia made it into complete and utter magic reading material.

In that same period I started attending conventions and brought a sketchbook with me and then I decided I wanted a theme.
I could go with my fav character (Vampirella) but I wanted to do something with an edge and to see if I can trigger an artist into something they have yet to venture into… 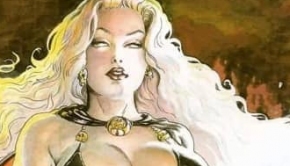