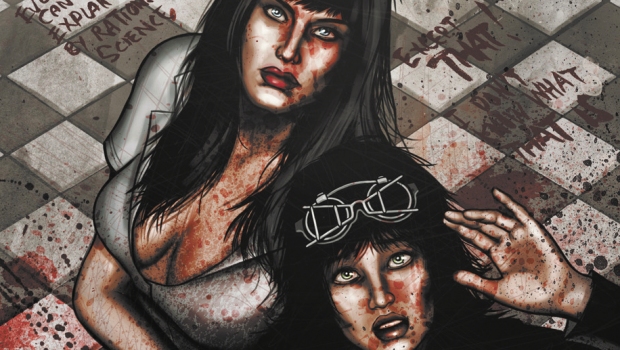 So don’t dally now!!! Pre-order these beasties and get in on the fun!

MALEFIC #4
“NORMAL IS THE NEW WEIRD”

During a breakout at The Pit, Doctor Freust becomes trapped on the roof with a mass murderer with a serious attitude problem. Pushing the boundaries of science and good taste to breaking point once more, Freust attempts to treat the inmate with an improvised technique that is definitely not in the book. Freust’s willingness to go to unethical lengths draws more damaging scrutiny from the devilish Inmate Eleven.

“Sticky Therapy.” Freust dishes out harsh treatment during a session that leaves her questioning her own sociopathic behavior. Maybe her new sordid reputation is deserved. When she seizes the opportunity to try a dangerous experiment on a sentient mannequin, the results are predictably catastrophic and it begins to looklike Inmate Eleven’s malevolent influence is pushing Freust closer to the same abyss of insanity that swallowed her father.