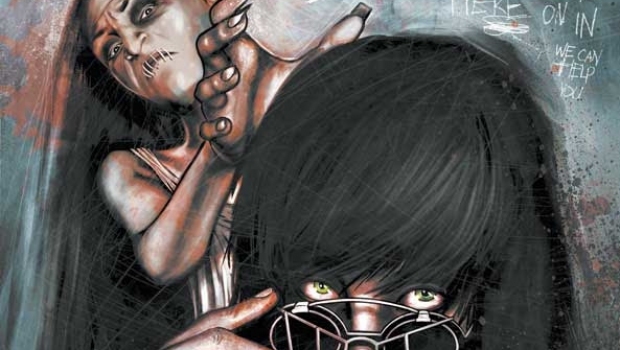 DAN SCHAFFER and DAVID MILLER join forces to concoct a twisted cocktail of science fiction and the supernatural in… MALEFIC, with #1 out NOW!!

ISSUE #1 EVIL IS JUST A WORD
Young Doctor Freust is a therapist in an asylum of horror where each deranged and diabolical inmate has a paranormal neurosis and a homicidal glint in their eye. Out of her depth, Freust must discover the techniques pioneered by her father for a secret religious cult, if she has any hope of surviving the madness.

ISSUE #2 THE DOCTOR WILL SEE YOU NOW

Freust begins to peel back the layers of The Pit, the secret mental asylum housing the world’s most dangerous supernatural killers. But the deeper she looks, the darker it gets. After her first encounter with Inmate Eleven, Freust begins to learn parapsychiatry, determined to protect herself from the inmates’ powers and give them the care they deserve. But when teenage telekinetic psychopath Missy Li attempts to melt Freust’s brain, she realizes this job going to be a baptism of fire.

Dan Schaffer is a UK based comic book writer/artist and screenwriter.
Other books by Dan Schaffer – Dogwitch, The Scribbler, Killdarlings, Indigo Vertigo, White.
Screenwriting credits include The Scribbler, Doghouse and Peripheral.