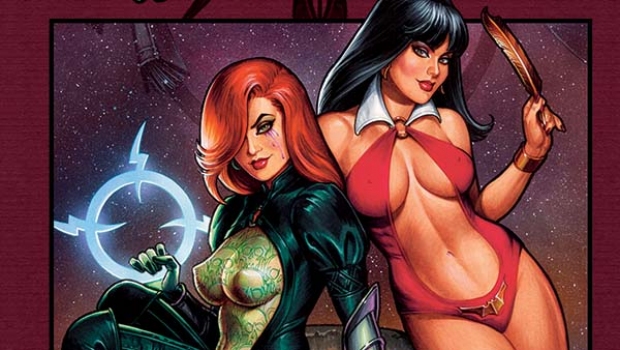 Joseph Michael Linsner, the celebrated creator of Dawn, wrote and illustrated the first-ever crossover event for his beloved goddess, teaming her — and pitting her against — Vampirella! When the silver-tongued demon Masodik kidnaps these beautiful, powerful women, he demands that the two engage in a catfight to prove which is best suited as his new paramour. The ladies suggest to combat in a more sophisticated and feminine way: by engaging in a storytelling contest. Together, Dawn and Vampirella take us on a journey to the bloody shores of Drakulon, post-apocalyptic New York, and worlds beyond imagination. Ultimately, they know that they must join forces to overcome him… but what common ground can be found between goddess and vampire?

This deluxe hardcover features an all-new introduction and never-before-seen bonus material by Joseph Michael Linsner, as well as all six of the artist’s breathtaking covers, plus an afterword by Kristina Deak-Linsner.

“Joe Linsner wove an incredible tapestry with Dawn and Vampirella, and beautifully illustrated the series. When we discussed collecting the series, we knew we had to up our game and give it the deluxe treatment to help match the incredible story and art,” says Dynamite CEO/Publisher Nick Barrucci. “The crossover with Dawn and Vampirella was a once-in-a-lifetime event, and now fans can have this masterfully rendered story on their bookshelves.”

Joseph Michael Linsner is most well-known for Dawn, his personal Pin-Up Goddess. After her debut appearance on the cover of Cry for Dawn #1 in 1989, Dawn struck a chord with thousands of fans on an international level. She is currently published in six languages and has come to life in the form of statues, action figures, t-shirts, lithographs, lunch boxes, and trading cards. An award-winning illustrator, Linsner has painted covers for all of the major comics characters, including Wolverine, the Justice League, Conan, and Vampirella. One of his proudest moments was getting to illustrate a short story written by Stan Lee for Actor Comics Presents.

This deluxe hardcover features 144 pages of whimsical art and story by Joseph Michael Linsner, priced at $24.99, and on sale in finer comic shops and bookstores everywhere in June.