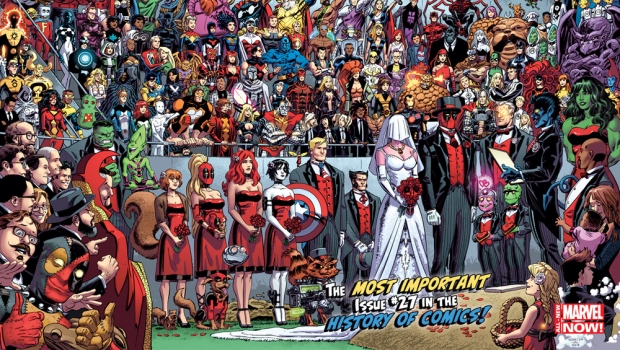 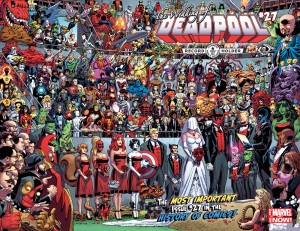 On sale today, DEADPOOL #27 sets a Guinness World Records™ title for the most comic book characters on a single issue cover! It’s a monumental, record-breaking issue as Wade Wilson ties the knot in front of hundreds of friends and family alike. The oversized cover of DEADPOOL #27 includes an amazing 232 characters and creators. With a total of 224 familiar comic book characters, it’s the most on a single issue cover ever, officially setting the Guinness World Records title.

Deadpool Editor, Jordan White, reflected on the recognition by Guinness World Records and said, “When artist Scott Koblish proposed this cover layout to me, I thought he was crazy…but it’s the kind of crazy you have to respect. I think there’s no better testament to both his insanity and the amazing cover he and colorist Val Staples produced than an officially recognized world record.”

The Merc with a Mouth is now the Merc in Matrimony in the pages of the super-sized DEADPOOL #27 – from current Deadpool writers Gerry Duggan & Brian Posehn along with an epic assortment of nine previous Deadpool writers.

A day many never dreamed would come has finally arrived – and it’s going to be anything but traditional. For starters, Deadpool’s bride Shiklah is an ancient and royal succubus (see Deadpool: The Gauntlet). The ceremony is going to be one for the ages! 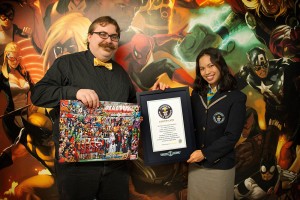 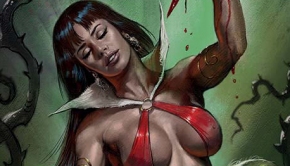