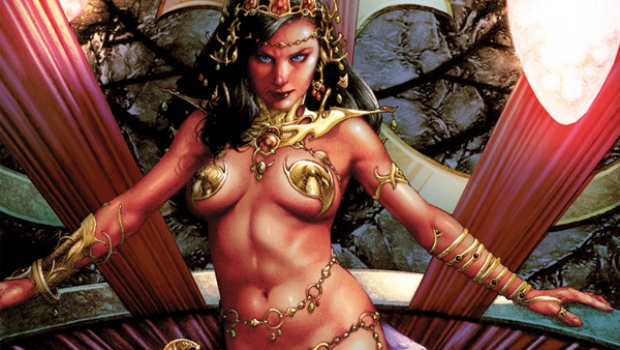 A Dynamite first – come April the Warlord of Mars comic series approaches a milestone one hundred issues will have been released to date by Dynamite Entertainment, which is truly a celebration.  But we’re not stopping there.  Dejah of Mars #1 arrives in-stores and digitally in May, and picks up exactly where the monumental #100 left off! The series is written by Mark Rahner, drawn by Jethro Morales, with covers by Jay Anacleto, Fabiano Neves and Mel Rubi!

In Dejah of Mars #1, John Carter has gone missing. And to find him there’s nothing Dejah Thoris won’t break. No one she won’t hurt. No hornet’s nest she won’t kick. But the Warlord of Mars stole an important Helium artifact before he disappeared, so not only is the princess on her own this time – she has to get Carter before anyone else does!

“John Carter has rescued Dejah Thoris countless times, and now it’s her turn to rescue him,” says writer Mark Rahner. “After everything she’s been through – getting kidnapped by Tharks who wanted her for meat, outwitting a terrorist who aimed to ruin the peace, surviving a suicide mission among Warhoons – Dejah Thoris isn’t screwing around. She’s going to find Carter and make whoever took him pay. And Issus help whoever gets in her way.”