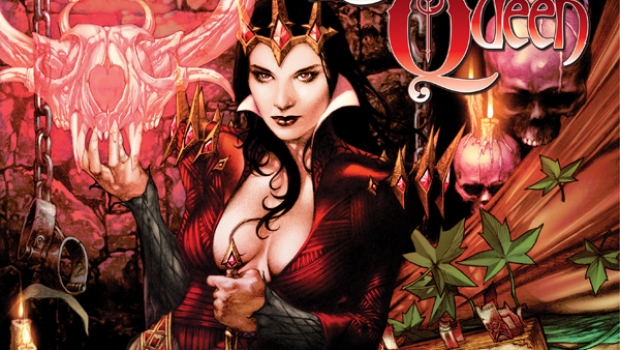 “I’m really excited to be working on Blood Queen for Dynamite,” says Troy Brownfield, perhaps best known for his fantasy work on Grimm Fairy Tales. “I’ve always liked books that pull together different genres and manage to work on a few levels, and that’s definitely something that we’re doing here. We’ve got the horror element, the fantasy element, and we have medieval drama and all that entails. That means knights, witches, monsters, warring kingdoms, star-crossed lovers, betrayal, and loads of secrets. Or, as I like to call it: a great time.”

Set against the fairytale backdrop of knights and magic, Blood Queen begins with the heartbreaking plight of a royal child, teetering between life and death. Summoned to save the princess, a young woman of untold power begins a journey that will uncover secrets, reveal forbidden desires, and stoke the fires of war. Inspired by the notorious true story of the Countess Elizabeth Bathory, Blood Queen imagines the Renaissance era as a colorful nightmare of mayhem, lust, and sorcery.

“In terms of characters, one of the central issues is the idea, ‘How are the evil queens of fairy tales made?'” says Brownfield. “It’s less a deconstruction like Wicked and more of a look at what could make a fundamentally good person go bad. Then again, that’s not to say that it’s always going to be the person that you expect, and it’s not going to happen in the ways that you think you’ll see coming. We want to deliver twists, turns and shocks. We’ll also deal with questions of power: who has it, who earns it, who takes it, and why.”

Writer Troy Brownfield has a lengthy history as a comic book writer, journalist, and college professor. He began working in comics on the journalism side, founding ShotgunReviews.com and notably contributing to Newsarama, The Pulse, Newtype USA magazine, and more. He was Associate Editor for Fangoria Comics and The Scream Factory. In addition to creating the webcomics Sparkshooter (with art by Sarah Vaughn) and Solo Acoustic at Sparkshooter.com, Troy has written for the likes of DC Comics, Dynamite, and Zenescope, where he was the regular writer on Grimm Fairy Tales: Myths & Legends from 2012-2013. Blood Queen is his first ongoing series for Dynamite.

Fritz Casas, the artist of Blood Queen, has contributed extensively to the Dynamite line in recent years, depicting dynamic, gorgeous female characters in such titles as Miss Fury, Red Sonja: Berserker, Kirby: Genesis – Dragonsbane, and Queen Sonja. “Fritz Casas is doing amazing work,” says Brownfield. “It looks incredible.”
“Troy’s writing is fresh and brings a great take on the character.” States Dynamite Publisher Nick Barrucci. “Troy’s first project for us was a Buck Rogers Annual he wrote years ago, which was nominated for an Eagle Award. I can’t say express how pleased I am that we are finally able to work on a new project together. Fans will be amazed by Blood Queen.”

Cover artwork for Blood Queen will be provided by Jay Anacleto (Warlord of Mars, Red Sonja) and Ale Garza (Deadpool, Teen Titans), while Sergio Fernandez Davila (Legenderry: A Steampunk Adventure) has created a Retailer Exclusive Variant image that can be tailored to promote individual comic shops.

Blood Queen #1 will be solicited in Diamond Comic Distributors’ March Previews catalog, the premiere source of merchandise for the comic book specialty market, and slated for release in June 2014. Comic book fans are encouraged to reserve copies of Blood Queen with their local comic book retailers. Blood Queen will also be available for individual customer purchase through digital platforms courtesy of Comixology, iVerse, and Dark Horse Digital.