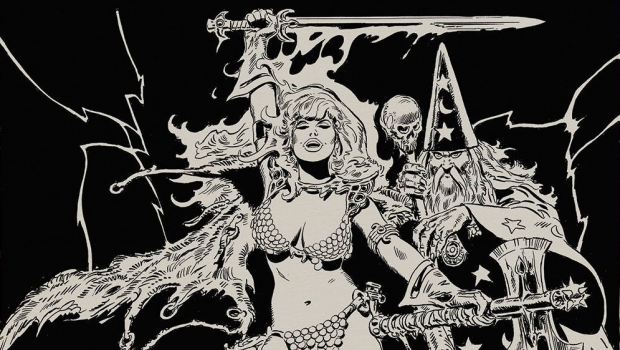 “What is it that makes Red Sonja endure? So many fine craftsmen had drawn her!” says Frank Thorne of the character. “When I took over Sonja in 1975, I was standing on the shoulders of giants. Still, many have said that I gave life to The Redhead, the living and iconic fantasy female (and sexiest title on the comics scene at the time). Fans should thank Roy Thomas, the great writer of comics and screenplays, for assigning me to shepherd Sonja into her own series. A sidekick no more, she was finally the star of the show!”

“Frank Thorne has been a keeper of the flame throughout the character’s history,” says Luke Lieberman, president of licensor Red Sonja, LLC. “Even long after he created his classic and inspired Red Sonja artwork, he engaged fans in person and at conventions. I believe he even had a theatre troop. Red Sonja would not be so strong today, if not for the creativity and efforts of Mr. Thorne.”

Frank Thorne began his comics career in 1948, penciling romance comics for Standard Comics. He drew the Perry Mason newspaper strip for King Features, plus a multitude of stories for Flash Gordon, Jungle Jim, The Green Hornet, and many more. Thorne’s name would become synonymous with Red Sonja, the iconic swordswoman from the Robert E. Howard’s Conan mythos, when his stint illustrating her adventures in the Marvel Feature comic book series led to a successful ongoing Red Sonja solo series, a celebrated run of comics from 1976 through 1979. He established her characteristic image as a ferocious and beautiful female barbarian wearing a chainmail bikini, which later became a popular fantasy literature archetype.

“Dynamite’s gorgeous, large-format Red Sonja Art Edition features complete reproductions of my Sonja stories in their original size,” confirms Thorne. “All the details of each page are seen exactly as I drew them.”

The process of creating the oversized Frank Thorne’s Red Sonja Art Edition involves high-resolution color scanning of original storyboard artwork, capturing the look of the artwork as originally illustrated, with all blue lines, corrections, editorial notes, and other distinctive creative elements intact. Each scan is then printed on heavy stock paper to give readers a more realistic experience of what it would be like to hold actual storyboard pages. To ensure the unique nature of this art collectible, Dynamite will limit Frank Thorne’s Red Sonja Art Edition to a single first printing, restricted to initial orders and not to exceed a “mintage” of 1,973 units to commemorate the character’s first year of appearance.

“We are honored to celebrate Frank Thorne’s enduring contribution to the history of Red Sonja, and to the comic book medium itself,” says Nick Barrucci, CEO and Publisher of Dynamite. “Original artwork is only available to a select few members of the comic book audience, and even then, only one person can own any individual page. When you consider that, in this particular case, the majority of Frank Thorne’s artwork had been kept in his private collection for decades (almost all the way back to the creation of Red Sonja herself forty years ago), you can fully appreciate what an absolute treasure this project is! We’ve thrilled to see these pages of original art rarely seen, if ever, by the world at large — and fans will share that same enthusiasm! With his truly unique art style, Frank is the perfect choice to headline the first-ever Dynamite Art Edition, launching our premiere line of high-end comic collectibles from the finest talents in the industry.”