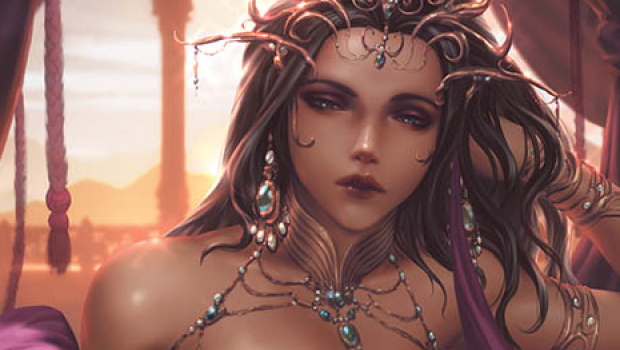 We’ve got some FUN stuff for February! Ryan Parrott has been impressing fans on Power Rangers, and now he’s kicking off a whole new era for ARMY OF DARKNESS! A superstar squad of over 20 creators are coming together for JAMES BOND IN “REFLECTIONS OF DEATH!” Ongoing writer Christopher Priest came to us with an idea to celebrate the contributions of African American artists through comics history on VAMPIRELLA with a fun “What If?” scenario for the covers, connecting back into the story. Also themed to the month is the cute set of Valentine’s Day covers on a range of titles. Plus Mark Russell takes readers into his second year on RED SONJA and brings Jae Lee along with him for covers! All of this and more from Dynamite in February 2020!

Red Sonja is fully made to understand that her victory over Kulan Gath not only led to the invasion of her world by a whole new kind of evil. but may cause time itself to end… much to the delight of the goddess of death, Mistress Hel. Only Sonja can set things right — but what she needs to do so will cost her a bargain with Lady Demon, as well as a personal quest her ego doesn’t want to accept. Thankfully she has backup in the form of the half-vampire, Chastity — and a good thing, too. To fix the path of fate, Sonja will need all the help she can get! The AGE OF CHAOS continues here!

Mysterious alien creatures secreted within the mountains of the British Virgin Islands capture Vampirella and transport her home to Drakulon just as Vampi’s best bud, Benny the Witch, is about to become a human sacrifice. Will Vampirella give up life on her home world to save yet another human? Will Benny be the guest of honor at a native barbecue?

Also this month: Dynamite Entertainment commemorates the contributions of African American creators of color with a special set of variant covers from some of the industry’s top talent!

This breathtaking tome reproduces countless already and soon-to-be classic portrayals of the Daughter of Drakulon on beautiful oversized pages. Picking up where the ART OF VAMPIRELLA: THE DYNAMITE YEARS left off, this brand-new, hardcover volume includes well over 40 covers from the smash hit Vampirella #1! Plus covers from the critically acclaimed 2014 run by Nancy Collins, the Linsners masterpiece Roses for the Dead, and much more from the Vampi library! This volume includes art from superstars including ARTGERM, J. SCOTT CAMPBELL, LUCIO PARRILLO, ALEX ROSS, JENNY FRISON, TERRY DODSON, JOE JUSKO, and many, many more!

If you love Vampirella, you don’t want to miss this testament to her legacy!

This third Replica Edition reprints one of the rarest issues in the run, including all seven original stories and the wacky ads to match across 66 oversized pages! All wrapped up with a cover by legendary underground cartoonist Vaughn Bodē. Known for his irreverent character Cheech Wizard published in National Lampoon, Bodē influenced animator Ralph Bakshi, the controversial graffiti art scene, and continues to inspire creators to this day. In this issue, Tom Sutton draws the second appearance of Vampirella’s cousin Evily the Witch. Also preserved for the Replica is the first ever edition of the famous Scarlet Letters, where Vampirella’s earliest fans wrote in with their praise and criticism. Including future Moon Knight creator Doug Moench, who would go on to write his first ever comic story in this very magazine a few issues later! Vampirella fans won’t want to miss this back in print gem!

Second appearance of Evily the Witch!

The saga continues from superstar DAN ABNETT (Guardians Of The Galaxy) and VASCO GEORGIEV (Xena)! The clock is ticking on Dejah and her family, to learn the secrets of the evil Barsoom regime…ticking, because they are being hunted by THE JEWELED KILLERS.


The land of Hyrkania is a vast place and Red Sonja has only just begun her quest. In this thrilling expansion to the original board game, players will encounter brand new regions, treasures, and characters that build upon Red Sonja’s legend and create all new experiences within the Legacy game system. These are the days of high adventure! This all-new expansion to the open-world, modular quest game includes 8 new playable heroes, an all-new desert region to explore, over 40 new cards, and a bonus set of playable Legacy characters like Robin Hood, Peter Pan, and more!

You’re traveling to another dimension, a dimension not only of sight and sound but of mind. A journey into a land whose boundaries are that of imagination. Your next stop, Vampirella and Red Sonja in Riverdale… 1973!

REUNITED! After months apart (or was it days? Hours? Minutes? Time travel’s weird), Sonja The Red and Vampi have found one another…and just in time, as there’s an evil lurking in the timestream…something big, something mean, something neither of them could handle alone…

And, because it’s February, we’re celebrating Valentine’s Day with a special variant by artist Lynne Yoshii!

A fight 25 years in the making: Vampirella vs. Hemorrhage! And even if the recently revived Darling of Drakulon wins, Mistress Nyx, with her cruel intentions, waits in the wings to undo the very resistance beginning to form around our hero! It’s all presented by acclaimed writer Tom Sniegoski and art sensation Michael Sta. Maria and an amazing series of covers!

When Charlie’s Angels pick up an assignment to steal a dangerous patent and put it back in the hands of its mysterious inventor, they encounter their toughest counterspy yet: Jaime Sommers, The Bionic Woman. This new volume follows two of television’s top teams after their programming run and into the 1980s.

When the Office of Scientific Investigation is privatized and its patents sold off to the highest bidder, a military contractor looks to take an experimental drug to the battlefield. Will the Bionic Woman be able to protect the patent from the would-be thieves, or will the Angels prevail, mothballing the formula’s military applications in favor of medical uses?

DEATH TO THE ARMY OF DARKNESS #1

An all-new series by RYAN PARROTT (Mighty Morphin Power Rangers) and JACOB EDGAR (Red Sonja)! It’s been six months since the events of the Army of Darkness film…Ash is just trying to settle down and get back to his groovy ways. But dammit, DEADITE-POSSESSED strangers keep attacking him at every turn. Why is evil following everywhere he turns, and what happens when an awful splinter spell causes Ash to become…TEAM ASH!?

An ALL-NEW, ALL-ORIGINAL James Bond graphic novel, by a cavalcade of superstars!

Six stunning stories, featuring the world’s greatest spy! Moneypenny has been kidnapped, and the mystery of who has her, and what they want, will only be revealed when (if?) 007 is able to complete his incredible missions.

The first arc concludes, from VITA AYALA (Morbius), DANNY LORE (Queen of Bad Dreams) and ERIC GAPSTUR (The Flash). Bond is in over his head. What started as a “punishment” assignment has expanded into a world of international crime that Bond can’t wrap his mind around. Will 007 accept that the mission is too big for one spy, and seek assistance…or will pride be his downfall?

After a mission of vengeance in Helsinki, James Bond returns to London and assumes the workload of a fallen 00 Section agent. His new mission takes him to Berlin, presumably to break up an agile drug-trafficking operation. But Bond has no idea of the forces gathered in secret against him, the full scope of an operation that’s much scarier and more lethal than he could possibly imagine. Berlin is about to catch fire… and James Bond is trapped inside. Dynamite Entertainment proudly presents VARGR, the debut storyline in the all new James Bond comic book series, as crafted by masterful writer Warren Ellis (Transmetropolitan, The Authority) and artist Jason Masters (Batman Incorporated, Guardians of the Galaxy).

Get acquainted with Dynamite’s James Bond comic series by best-selling writer Warren Ellis with a Dynamite Dollar 1st Issue! James Bond returns to London after a mission of vengeance in Helsinki, to take up the workload of a fallen 00 Section agent. But something evil is moving through the back streets of the city, and sinister plans are being laid for Bond in Berlin…

Ready for more after this initial sampling? Check out Dynamite’s JAMES BOND WARREN ELLIS OMNIBUS, also on sale this month!

Bob Benton’s had an adventurous life, but it isn’t without its tragedies. Now he must face a mistake he made years ago, and it will determine the fate of Black Terror!

Chastity is up to her elbows in blood—some of it is even her own!—and she’s out of allies and out of options.  Forget saving the group of human trafficking victims she’s given her all to protect—she’s going to have a hard-enough time getting off an uncharted (for nefarious reasons) island she’s stranded on.  Is this it for Chastity Jack?

Daenerys receives a dire warning while she basks in the comforts offered in the city of Qarth, while more than a thousand miles distant, Stannis makes his move on Ser Penrose and Storm’s End. Peace and diplomacy will be cast aside as the Red Woman Melisandre displays the full power of those who embrace R’hllor, the Lord of Light – much to the horror of those that bear witness to this magic. All this, and more, as another chapter unfolds in this visual adaptation of George R. R. Martin’s epic masterpiece, A Clash of Kings!

The origin of the zombie outbreak is revealed! Alliances are tested! Roads are traveled! KISS and crew make their way to the source of the signal in search of hope, but what they encounter could be their biggest threat yet. And that is saying a lot…what with the zombies and all.