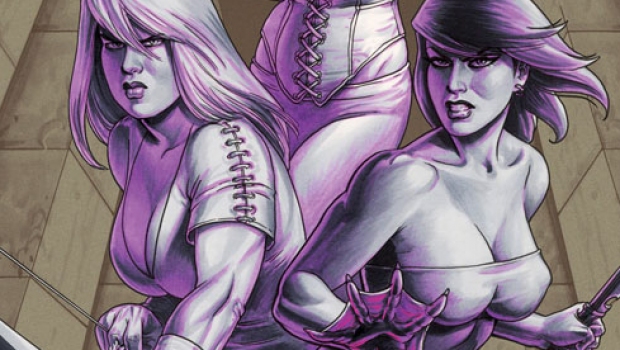 Dynamite Entertainment has provided BF with a first look at their titless, coming to stores worldwide on May 22, 2013.

From the tales of Cinderella, Sleeping Beauty, The Little Mermaid and Snow White comes Damsels! While the Villeneuve army battle the fairy forces, Rapa, Talia, Red and Heinrich arrive at the Great Oak in the heart of the Enchanted Forest. They are welcomed by King Oberon, who it seems has been expecting them. Fresh from their battle with the Dryads, the Queens Rapunzel and Talia reach the Kingdom of Villeneuve at last. There they and Queen Belle can finally seal their magical compact and begin their reign of dark sorcery.

32 pages FC • $3.99 • Teen +
Written by Eric Trautmann
Art by Marcio Abreu
Covers by Mel Rubi (cover A), Erik Jones (cover B), Walter Geovani (cover C)
(Fans – each cover has it’s own UPC so you and your retailers can order the Special Anniversary Covers of your choice!)

On the snowy steppes of Hyrkania, Red Sonja faces off against an army bent on crushing her homeland. Old scores are settled, alliances are broken, and rest assured, with the She-Devil With A Sword entering the fray, blood will surely flow.

More thrilling horror and excitement in another masterpiece collection of vintage Vampirella classics! Take another journey into frightening and gory tales brought to you by a host of frighteningly talented writers and artists. Reprinting issues #43-49 of Vampirella Magazine as she does battle with the forces of Chaos and a new deadly nemesis – The Blood Red Queen Of Hearts! Also featuring classic covers by the likes of Enrich and Ken Kelly. Stories and art by virtuoso talents like Jose Gonzalez, Esteban Maroto, Len Wein, Neil Adams and many more all bound in another heavy collection brought to you by Dynamite!

Since sending the Demon to his rightful damnation, police officer Sara Pezzini has turned her attentions to raising her child, dealing with the stresses of a criminal trial, and bearing the responsibility (and burden) of the mystical Witchblade. But the Demon’s tale is not yet finished! In the depths of Hell, he encounters the Demoness, a creature capable of sending him back to Earth. Sara will soon learn that there’s nothing so dangerous as a being of pure evil, full of revenge and fueled by hope!

Collects the four-issue miniseries, the original Witchblade: Demon #1 by Mark Millar and Jae Lee, and a complete cover gallery by Dennis Calero and Jae Lee.