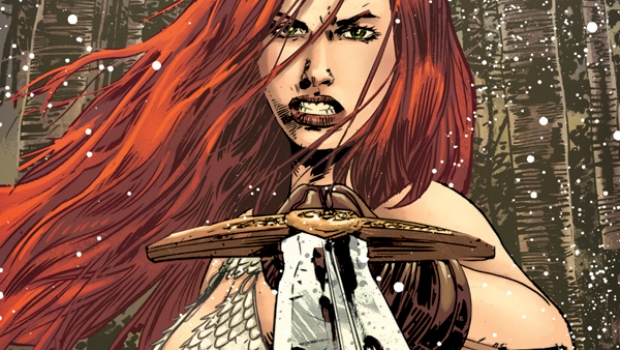 Dynamite is celebrating its 10th Anniversary in style this year by releasing four #0 one-shot special issues having important story tie-ins within each series! To unify the event, each issue features gorgeous covers by Gabriel Hardman! Regular series scribe Fred Van Lente writes Magnus: Robot Fighter #0, with interiors by Roberto Castro! Red Sonja #0 is written by Gail Simone and drawn by Ivan Rodriguez! The Shadow #0 features the Dynamite writing debut of Cullen Bunn and is drawn by Colton Worley! Warlord of Mars #0 is written by Matt Brady and drawn by Jack Jadson!

“Very excited Magnus has been chosen to represent the Gold Key line as part of Dynamite’s 10th Anniversary celebration,” says Magnus: Robot Fighter #0 writer Fred Van Lente, “We came up with a great stand-alone story starring Leeja Clane, Human Hunter, as she pursues the Robot Hunter who preceded Magnus. This issue exposes the secret of the oft-mentioned Singularity, a major part of Magnus mythology, and is a must-read for regular readers!”

In Red Sonja #0, Sonja the She-Devil returns from war at sea, only to find that the entire coastline has been living in fear of a beastly marauder named Red Malak…who claims to be Sonja’s HUSBAND! Don’t miss this special Dynamite anniversary comedy of terrors as we ask: who in the Hyborian Age is Red Malak?

“My advice is to only buy Red Sonja if you like high adventure, filthy humor, bloody combat, horrid monsters, fearless heroes, evil villains, saucy fun, thrills, sex and violence,” states Red Sonja #0 writer Gail Simone. “We are having the best time ever making this book. It’s a labor of love from everyone involved. The stories are sly and fun, the interior art is gorgeous, the covers are magnificent, and oh, yes, we just happen to have the most amazing female barbarian of all time as our lead character. I love Sonja, the whole team loves Sonja, and we love presenting her at her foul-mouthed, ill-tempered best. You should pick up this book or Red Sonja might get peeved at you. And you don’t want THAT.”

In The Shadow #0, secrets of The Shadow’s past are revealed as he meets Houdini! The Shadow infiltrates the sanctum of an esoteric society of murderous magicians, who are hell-bent on escaping the ultimate trap-death itself! In order to thwart their plans, he must evade twisted traps and solve spellbinding puzzles. A good-or evil-magician never reveals his secrets… but The Shadow knows.

“I’ve long been a fan of pulp heroes, and the Shadow was my introduction into that world,” says The Shadow #0 writer Cullen Bunn. “I remember my dad recounting adventures of The Shadow he had heard on the radio as a boy. And my dad could do the best imitation of the Shadow’s laugh! I like to think that he’d get a real kick out of me contributing to the legacy of the character. I know I couldn’t be more thrilled. In this tale, we see the Shadow infiltrating a secret society of magicians who are willing to do anything to lay claim to what might be the most forbidden of secrets. As the Shadow evades devious deathtraps, we learn that he has a connection to the greatest magician of all time.”

“With this issue, I wanted to show readers a straight-up picture of who John Carter is, what’s most important to him, and what kind of stuff he’s made of,” says Warlord of Mars #0 writer Matt Brady, “The best way to do that? Do the most horrible things I could imagine to him. We see earth again, we see a new monster of Mars, Dejah and Tars, skin of your teeth adventure, blood and guts, and John Carter – being the hero he was born to be.”