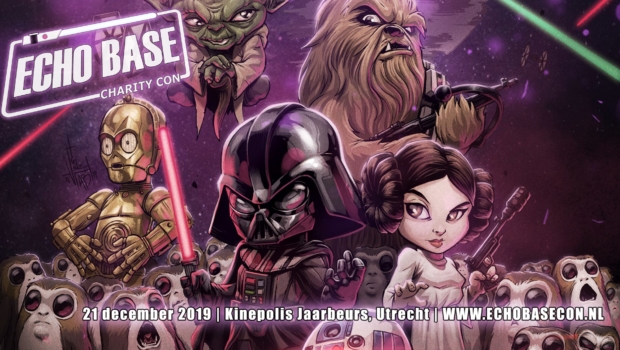 Tomorrow, October 4, Force Friday, the worldwide Star Wars event that kicks off the cinema release on December 18 of Star Wars – Episode IX: The Rise Of Skywalker, the long-awaited, final part of the Star Wars Skywalker saga, takes place . This premiere is celebrated by the Echo Base Foundation with the fifth edition of Echo Base Charity Con, the only 100% Star Wars event in the Benelux.

One of the most important elements of Echo Base Con are the panels that will take place on our impressive, 575-seat Main Stage. Echobase is proud to announce that Brainpower, one of the most successful artists in the Netherlands as well as a Star Wars überfan, will host the Main Stage of Echo Base Charity Con 2019.

Brainpower is a very successful artist, both in the Netherlands and abroad. So far, he has received over 45 gold or platinum records and awards, and sold over 1 million records such as the Dutch mega hit “Dansplaat”. In 2018, Brainpower won his first award in the United States: the Global Peace Song Award for his track “All The Same”. His track “Animal Sauvage” appears on the soundtrack of the blockbuster film The Equalizer 2 with Denzel Washington.

Besides a passionate artist, Brainpower is also producer, record company owner and entrepreneur. As a songwriter, he works with (and for) other artists on projects both domestic and abroad. He is also a regular on Dutch TV station RTL because of his enormous knowledge of music, film and pop culture.

Echo Base Charity Con will take place on Saturday December 21 in Kinepolis Jaarbeurs Utrecht. The proceeds of the event will go to the Children Cancer Free Foundation (KiKa). Ticket sales have since started via www.echobasecon.nl.

Visitors
Star Wars-uberfan Brainpower * hosts the main stage at Echo Base Charity Con with various guests from behind and behind the scenes from over 40 years of Star Wars history. Oscar winner Lorne Peterson, among others, is a guest. Peterson is one of the founders of the legendary special effects company Industrial Light + Magic when he was hired by George Lucas in 1975 to help build the models for the first Star Wars film. He then worked on the sequels The Empire Strikes Back and Return of the Jedi. His hand is visible in almost every model that can be seen in the original trilogy. Peterson also worked on the three Star Wars prequel films and many other classics such as E.T. the Extra-Terrestrial, Ghostbusters, Back to the Future, Jurassic Park and Indiana Jones and the Temple of Doom for which he received an Oscar in 1985.

Panels
Various panels will also take place during Echo Base Charity Con 2019, such as “A day in the life of a LEGO Star Wars designer”. In this panel, Niels M. Frederiksen from Denmark will talk about how his childhood dream came true when he started working as a designer at LEGO in 2013. Sincedin, he has designed no fewer than twenty Star Wars sets, including Rey’s Speeder, the Sandcrawler and the San Diego Comic-Con exclusive Sith Trooper.

In addition to Peterson and Frederiksen, Echo Base Charity Con also welcomes Michael Pennington (featured in Return of the Jedi), Katy Kartwheel (featured in The Force Awakens, The Last Jedi and Solo: A Star Wars Story) and Angus MacInnes (featured in Star Wars and Rogue One).

About Echo Base Charity Con
On Saturday December 21, Kinepolis Jaarbeurs Utrecht will be transformed into a mecca for Star Wars enthusiasts. There is a huge amount of merchandise (toys, posters, T-shirts, books, etc.) for sale, an auction is taking place with unique items for the benefit of the Children’s Cancer Free Foundation (KiKa), there are many Star Wars cosplayers and driving well-known robots like R2-D2 and BB-8 around.

Young visitors are also thought of: children can learn how to fight with a lightsaber, play Star Wars games and be painted as their favorite Star Wars character. This makes Echo Base Charity Con not only a fantastic event for Star Wars enthusiasts, but also suitable for the whole family. 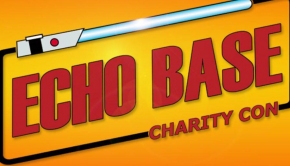