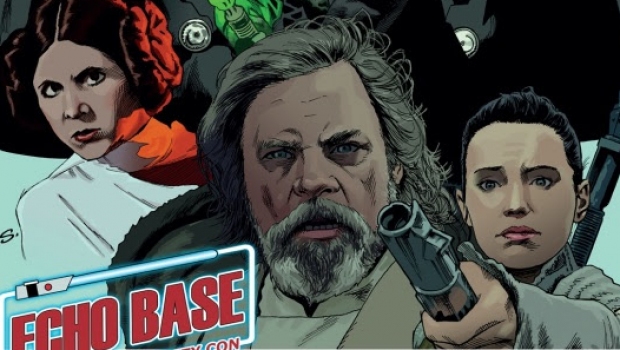 On October 13, 1977, the European Red-carpet Premiere of Star Wars took place in Arnhem. Tomorrow that will be exactly forty years ago. Foundation Echo Base seizes this opportunity to announce with pride that Guy Henry (Tarkin in Rogue One), Michael Carter (Bib Fortuna in Return of the Jedi) and Brian Herring (BB-8 in The Force Awakens and The Last Jedi) have been added to the guest list of the Star Wars event Echo Base Charity Con on Saturday December 16 at Kinepolis Jaarbeurs Utrecht, the Netherlands. The event has a special purpose: Echo Base Charity Con’s net proceeds will -in collaboration with Star Wars: Force for Change– be donated to the work of UNICEF for children worldwide.

Today, the Echo Base Foundation also unveils the Echo Base Charity Con–poster, made by American comic artist Stephen B. Scott (design by Art Grafunkel), known for example for the official comic book of the Batman movie The Dark Knight and the comic Indiana Jones and the Tomb of the Gods.

It has previously been announced that Jeremy Bulloch (Boba Fett in The Empire Strikes Back and Return of the Jedi) and Tim Rose (Admiral Ackbar in Return of the Jedi, The Force Awakens and The Last Jedi) will be present. Fans can meet the various Star Wars actors during the signing sessions and Q & A’s that are organized.

Forty years and counting, young and old are hooked on Star Wars and with the upcoming new movie Star Wars: The Last Jedi it is not near yet over. For the initiator of Echo Base Charity Con, Wiebe van der Werk, there are plenty of reasons to set up a grand event: “Star Wars is unprecedented popular. In recent years, with the advent of new Star Wars films, popularity has even increased and the fan base has grown. Echo Base Charity Con offers a great event for all Star Wars fans from young to old. We are also very proud of our collaboration with Star Wars: Force for Change, with whom we will donate the Net Revenue of the Event to UNICEF, and thus we use the Force to contribute to its good initiatives in the field of childrens rights worldwide . We are looking forward to a successful event in December! “

Tickets are available at www.echobasecon.nl and in all stores of Primera.