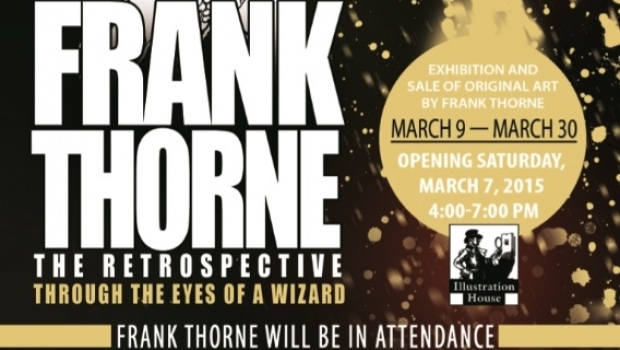 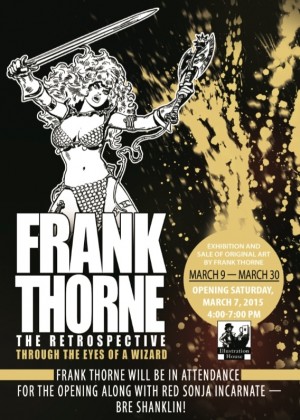 From March 9 to March 30, 2015, in New York City, Illustration House presents “Through the Eyes of a Wizard”: Frank Thorne’s first-ever exhibition and sale, with over 70 original works, from Red Sonja to his contemporary paintings, curated by Zaddick Longenbach.

Frank Thorne started his comic career in 1948 at the age of 18, paying his dues on romance stories and titles from Tom Corbett to Twilight Zone, until Robert E. Howard’s heroine Red Sonja came under his pen in ’75, and he never looked back. Frank came into his own with the sexy, feisty barbarian, making Sonja one of Marvel’s top-selling titles, as well as getting one of the first conventions devoted to a single character: Sonja Con, in 1976.

“Through the Eyes of a Wizard” debuts on Saturday, March 7, 4:00 p.m. to 7:00 p.m. In attendance will be Frank Thorne and current Red Sonja model Bre Shanklin. The exhibition then opens to the public on March 9, and runs through March 30.

Illustration House is located at 34 West 27th Street, 4th Floor, New York City. All works will be viewable online prior to the opening, at Illustrationhouse.com.