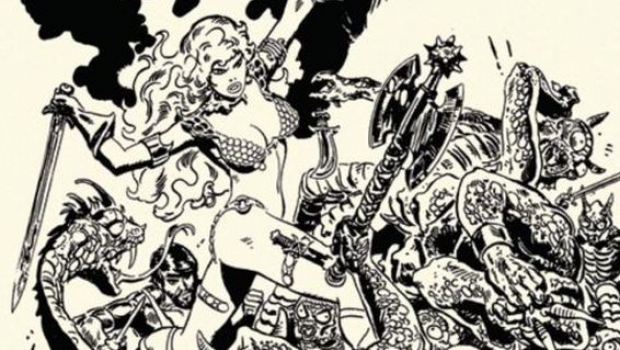 Frank Thorne’s Red Sonja Art Edition Volume 1 is a huge hit and selling fantastically, and we couldn’t be prouder to announce that Volume 2 is shipping in August! Dynamite Entertainment proudly celebrates the seminal work of a legendary fantasy illustrator with Frank Thorne’s Red Sonja Art Edition, presenting, for the second time, the actual storyboard artwork from the first six issues of the acclaimed 1977 Red Sonja comic book series. Scanned in high-resolution color and printed at original size, this gorgeous hardcover collection preserves every detail of the artist’s meticulous skill and hard work, while simultaneously presenting a complete storyline for the enjoyment of longtime She-Devil fans.

“HEADS UP all you stalwart Sonja fans, Volume 2 of the SCARLET SIREN’S adventure’s is about to launch,” says Frank Thorne of his upcoming second art book! “Volume 2 is JAM-PACKED with action and intrigue that YOU CAN’T ARRORD to miss! So she’s cleared for takeoff and destined to be a VITAL ADDITION to your collection!”

“It’s appropriate that Frank Thorne dressed as a wizard at conventions back in the ‘70’s and summoned women dressed as Red Sonja on stage for fans, Frank’s work on Red Sonja is the stuff of legend,” states Dynamite CEO/Publisher Nick Barrucci. “We’re honored to be working hand in hand with Frank to present his artwork in this prestigious format that will be loved by fans for years to come. “Red Sonja is one of the first characters that Dynamite published, and it’s rewarding to see the success of the first Art Edition, and be able to release the complete Frank Thorne series this year, during our 10th Anniversary Celebration.”

Frank Thorne began his comic career in 1948, penciling romance comics for Standard Comics. He drew the Perry Mason newspaper strip for King Features, plus a multitude of stories for Flash Gordon, Jungle Jim, The Green Hornet, and many more. Thorne’s name would become synonymous with Red Sonja, the iconic swordswoman from the Robert E. Howard’s Conan mythos, when his stint illustrating her adventures in the Marvel Feature comic book series led to a successful ongoing Red Sonja solo series, a celebrated run of comics from 1976 through 1979. He established her characteristic image as a ferocious and beautiful female barbarian wearing a chainmail bikini, which later became a popular fantasy literature archetype.

The process of creating the oversized Frank Thorne’s Red Sonja Art Edition involves high-resolution color scanning of original storyboard artwork, capturing the look of the artwork as originally illustrated, with all blue lines, corrections, editorial notes, and other distinctive creative elements intact. Each scan is then printed on heavy stock paper to give readers a more realistic experience of what it would be like to hold actual storyboard pages. To ensure the unique nature of this art collectible, Dynamite will limit Frank Thorne’s Red Sonja Art Edition to a single first printing, restricted to initial orders and not to exceed a “mintage” of 1,973 units to commemorate the character’s first year of appearance.