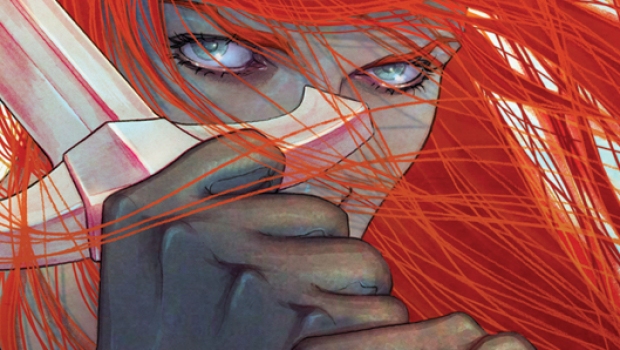 Dynamite Entertainment is excited to announce that Gail Simone is continuing her critically acclaimed best-selling run!

“I have always said that the thing that makes Red Sonja MOST dangerous is not her skill with a sword, or her speed,” states acclaimed writer Gail Simone. “It’s her cunning. Red Sonja is cunning. And she gets what she wants. When I first agreed to write Red Sonja, I wanted to do one great Sonja story and drop the mic (assuming of course that the story didn’t suck and people instead started throwing things at me). So I wanted to do six issues. Then I started writing her, and she just got very controlling about it, frankly. I went from doing six issues to agreeing to twelve. I went from doing one Sonja book to two, adding the wonderful LEGENDS OF RED SONJA with some of my favorite female writers. Then I went from two Sonja books to three, in agreeing to do CONAN VS. RED SONJA. I kinda got greedy. So Dynamite have generously kept me on for an extended tour of more issues of mayhem, blood, sex, and red hair, because Sonja is Sonja, and Sonja is hard to turn down. Because Sonja is CUNNING.”

“We couldn’t have found a better partner for the She-Devil with a Sword than Gail.” states Dynamite CEO and Publisher Nick Barrucci. “It was last year at Emerald City Con that we announced Gail on the series, and it’s only fitting that we announce her extending her run at this year’s Emerald City Con! When she showed up at the panel, with a sword in hand, we knew that her passion would bring out some of the best stories we would ever have, and she proved us right. We’re really grateful that Gail is extending her run on the series.”

Check out the incredible reviews Dynamite has received for Gail Simone’s Red Sonja!

“Gail Simone’s script has a ton going on but gives the characters strong speeches and a plot that’s got a touch of Shakespeare in it.” – Newsarama

“In an interesting twist of events, it isn’t brawn and a sword that save the day. There are different kinds of strength, and Simone emphasizes that more subtle forms of defiance are every bit as powerful as the more obvious.” – IGN Comics

“The character of Red Sonja herself is Gail Simone in comic book form. Strong, clever, funny and defiantly in charge of her own destiny. And those covers by Jenny Frison, beautiful, absolutely beautiful. Raise your glasses to Red Sonja, all hail Red Sonja.” – Geeked Out Nation

“Gail Simone has crafted a stellar first arc that deliver on all fronts.” – Comic Book Therapy