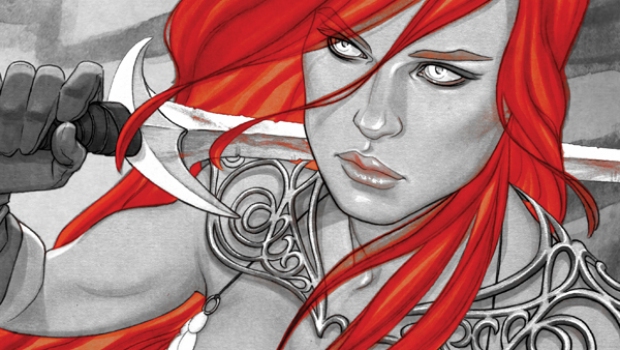 Thanks to the overwhelming support of retailers worldwide, Dynamite is proud to announce that Diamond Comic Distributors has sold through the entire 35,000 print run of Red Sonja #1’s first printing prior to the store release date of July 17th.  Bolstered by enthusiasm from dedicated fans and exceedingly favorable early reviews, the successful Red Sonja relaunch — written by Gail Simone and featuring artwork by Walter Geovani — can still be enjoyed by consumers thanks to an upcoming Second Printing (Diamond Item Code MAY138378) featuring variant artwork by Jenny Frison.

“On behalf of Team Sonja, I cannot begin to express my appreciation to the retailers for supporting this book so whole-heartedly,” says Gail Simone, writer of the new Red Sonja series and acclaimed author of Batgirl, Birds of Prey, and Secret Six.  “Out of thousands of things to order from each month, they chose to spotlight our book in shops around the country and I can’t say ‘thank you’ enough.  Even more, we are absolutely gobsmacked by the excitement and enthusiasm expressed by readers, many thousands of whom have never read a Red Sonja book before.  Nothing happens without you guys, and we humbly thank you from the bottoms of our little barbarian hearts!  Thank you also to the magnificent female artists who made all the sensational covers for this series, and above all, the spectacular Walter Geovani, whose dedication makes working on the book a joy.”

Tony Guerrero of Comic Vine conducted the first-ever review of the Gail Simone series, and his response:  “There’s a new Red Sonja series coming and she’s more than ready to kick plenty of butt!”  He continues, “There is a craving for epic fantasy adventures these days.  Red Sonja is no stranger to these types of stories and Gail Simone shows she completely understands the character.  Usually seen as just a female warrior with a sword, Simone shows that Sonja is not someone your favorite comic character would want to mess with.  This is the perfect jumping-on point for new readers, and old readers will enjoy Simone’s take.  We find out a little about her past without this being a full-fledged origin story.  There is a great mix of action, backstory, humor and good old fashioned storytelling here.  I’ve read Red Sonja comics off and on in the past and this issue fully captures my attention.”

Nick Barrucci, CEO and Publisher of Dynamite, commented, “Red Sonja and Gail Simone.  Really, what more needs to be said?  This is a match made in Heaven.  The entire Dynamite team is thrilled and gratified that the retailers have supported with such strong orders and feel they will be rewarded with instant sell-through.  We want to express our sincere gratitude to all the retailers and fans whose excitement and support have surpassed every possible expectation.”

Dynamite has made its Second Printing available for retailer orders immediately through Diamond Comic Distributors.  Retailers can place orders use the Diamond item code MAY138378.