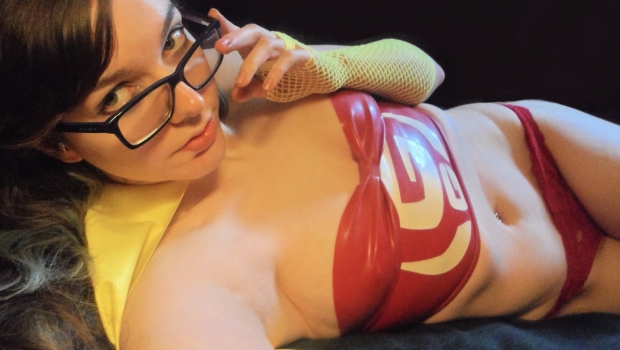 When ‘Little Miss Popular’ Ruby Kaye lands a pair of super-tech glasses (invented by brainiac college geek Trevor Goldstein) in a game of Strip Poker, she’s granted flight, super-strength, and – due to a flaw in the glasses’ programming – super-klutziness! And this is just the beginning of the changes the glasses will wreak on Ruby.

“Geek-Girl has been building up a following, including a large Facebook Group, since the first printing came out,” says creator/writer Sam Johnson (The Almighties, Cabra Cini: Voodoo Junkie Hitwoman), “and things are going to get taken to the next level for Ruby.” Johnson continues, “GG now has her own official model in Lady Larkin ( https://www.facebook.com/larkincosplay84 ) , who features on the new limited photo variant; and things are progressing with the Geek-Girl mini-series – and more work-in-progress is gonna be getting rolled out at the Facebook group as artist Carlos Granda continues his work on it.”

But for those who aren’t already familiar with Geek-Girl, the new printing of Geek-Girl #0 provides the perfect entry point to her universe. Johnson continues, “I have huge plans for GG, and the mini-series will see her thrown headlong into the world of ‘tights and capes,’ but Geek-Girl #0 is where we meet Ruby Kaye, the person – a hot college It Girl who hangs with the cool clique and gets whatever she wants. But when what she wants is the glasses, they’re going to come with a lot more than she bargained for.”

“EVERYTHING changes for Ruby,” says Johnson; “With the effect the glasses have on her, she is gonna find out just how flimsy her ‘cool kid’-based friendships are; and by the end of Geek-Girl #0, she ain’t gonna have many left. Oh, but that’ll be the least of her problems, with who – or WHAT – then shows up!

Geek-Girl #0, written by Sam Johnson, illustrated by Sally Thompson, and published by Actuality Press is available now in Regular and Ltd. Photo Variant editions at www.geekgirlcomics.com

“This book is every geek guy’s fantasy come true.” Ain’t It Cool News

“Geek-Girl #0 is an excellent example of how a debut issue should be done.” -The Early Bird Special

“This book is everything I love about indie comics.” Adam Cheal, Comic Booked

The tagline is “with great glasses comes great klutizness,” and that pretty much sums up the approach of this surprisingly charming indie debut.” Kris Bather, Broken Frontier