Given to Me: Dracula in Hell – Comics for Sinners
given to me 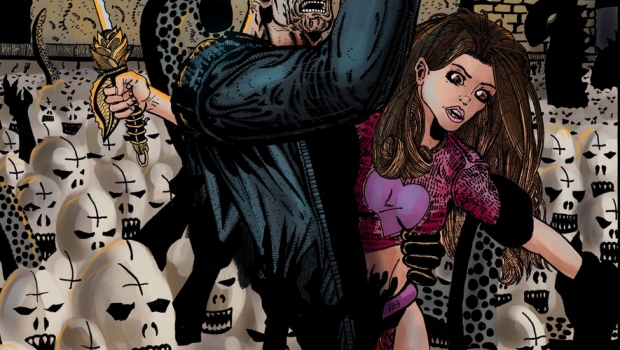 Given to Me: Dracula in Hell

Time for another Given to Me column and today I want to talk about the first Karl Vincent: Vampire Hunter graphic novel. It’s called Dracula in Hell and is a prequel to the next miniseries Dracula Rising. Drawn and co-plotted by Dennis Magnant and the B/W version is available now on Kindle and Amazon.
Fans of C.S. Lewis (The Chronicles of Narnia) will be pleased that the demons Screwtape and Wormwood make a cameo and it’s Screwtape that leads Karl to Hell in the first place. The story opens with a flashback to Dracula being in hell (presumably after being killed the first time by Abraham Van Helsing) and granted leadership over a vast army that he is preparing for the Equality Equinox during which he plans on taking over the earth for vampire kind. Then we’re shown a brief history of Vlad’s attempts to conquer the world. Recruiting a soldier from ancient Rome, manipulating the powers that be during 9/11 and how he came to control the Nazi’s through a child hood friend of Adolf Hitler, August Kubizek.

Then Karl arrives! He was killed prematurely by a vampire that tossed him into a wood chipper, which explains why he’s all cut up. He runs into his aunt Cathy who disappeared during Christmas 1974 and no one knows what happened to her. She winds up leading Karl through Hell and guides him on this mission. You see, Karl wasn’t supposed to have died at that time but because he did, Dracula was allowed to cause inter-dimensional Armageddon on two planets, Earth and Noctorum. Dracula’s kind of vampire doesn’t just feed off of blood but off of negative emotion; hate, fear sadness, despair, etc. The interdimensional warfare that was caused fed his soul immensely, more than at any other time in his existence.
If Karl can pass the test that the head demon has set up for him, then he can return to the point in time that he prematurely “died” and set the course of time right again! As he progresses through the test, he meets some great hero’s from history that aid him in getting back to earth including Ares; god of war, Beowulf, and Perseus. One of the demons, who seems to know Karl, is carrying a mysterious chicken called the Cockalorum, what is this strange bird’s secret? Read and find out! Find the graphic novel on amazon also on Kindle! Coming soon to Indyplanet and Ka-Blam for any retailers that might want to pick it up. Please remember to go to the Facebook page for more information and “like” us.
For your viewing pleasure, sample pages from the novel.