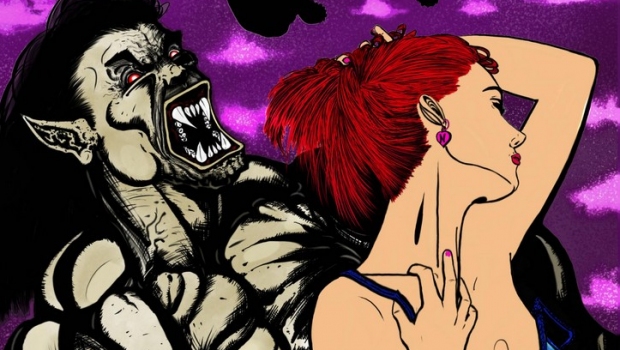 Given to Me: Dracula Rising

This week I want to talk about Dracula Rising. I know we touched on the story before, but I want to give greater detail and showcase Dennis’ work. We looked at issue two which is almost complete with 4 pages to go, art by Rodolfo Ezequiel. Now I want to look at the story as a whole and issue one with my first artist: Dennis Magnant. Dennis went on to work on a project he is passionate about, but I do hope to work with him on future comics, he’s a good artist. I will share a few of his pages in this article. You can read the black and white version of Dracula Rising #1 for free on Indyplanet (color version is .99) 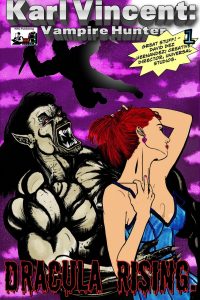 The opening prologue features a sub plot that isn’t quite developed about Karl’s uncle Steven Vincent. Who died exactly one year after his wife did. Steven’s wife Cathy plays a prominent part in the Trade Paperback Karl Vincent Vampire Hunter: Dracula in Hell. We’ll start with the two covers; the red cover is to the black and white version with the muscular Dracula being the cover to the color version, then we come to the splash page. Here we see Karl in his office. He’s just waking up from his nightmare about the possibility of vampires being involved in his uncle’s disappearance. A great splash that showcases Karl as a bit of a slob (just like me.) and some of his inner turmoil.

In true noir fashion a mysterious lady arrives in his office asking him to go on a vampire hunt (Loew is an homage to the Nicholas Cage Flick Vampire’s Kiss.) Before seeing any vampire’s Karl blacks out and comes to in his office, blood has been drawn and he doesn’t know what happened.

He’s visited by Athanasius Timon (Nathan, whom he met in Last Rites: The Return of Sebastian Vasilis.) Nathan is the most important character in my universe, he’s an immortal time traveler that will show up in every novel or publication I put out. In Last Rites we met the current Nathan (father of Athena Timon.) In this issue we give the story a bit of a Sci-fi slant as the Nathan that shows up is from the future, he acts different than the Nathan he met in Cairo. Dennis had an interesting slant on this page in that Karl was seeing things woozy when he came too, and Nathan knocked on his door.

Here we discover that the lady who visited Karl was also from the future and was, indeed, Dracula’s daughter, Dominica. Nathan explains that Dominica came back to raise her father from the dead in time for the Equality Equinox. We’ll discuss more next week in this column.