Given to Me: How Dracula Came To Be – Comics for Sinners
given to me 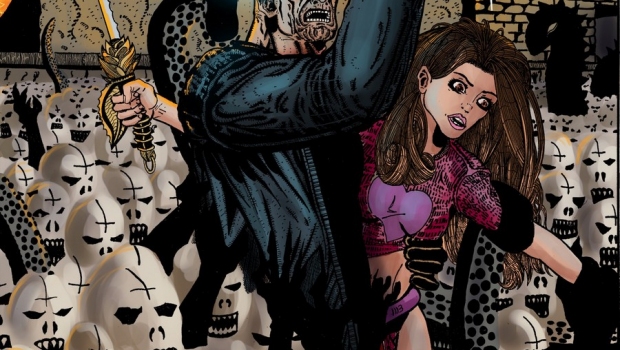 The Indyplanet version of Dracula in Hell is finally available and I’d like to discuss how this whole project came to be.

I met Dennis Magnant, artist extraordinaire, when he was but a mere high School Student and before he went to the Joe Kubert School of Art. We came up with a superhero comic book called Tourniquet, which he’s still working on to this day. Back in the stone age into which we were born there was no social media, no print on demand, no lap tops and no cell phones. It all had to be done on paper and printed the old-fashioned way. And it cost money. We printed up a bunch of these amateur comics and went to a local comic book convention in Bangor, Maine.
Dennis art in those days, though fairly good, was still in its infant stages. The comic sold a few copies but nothing great and I, only being a minimum wage earner at the time (which was about $5.00 an hour,) couldn’t afford to produce anymore. So, that was our only foray into comic book production in those days. Long story short we went our separate ways, me to Florida, he to Arizona. Many years later, we found each other thanks to the social media we didn’t have when we first met (Facebook.)

I had already come up with the Karl Vincent: Vampire Hunter character and produced comic books based on it (not to mention novels.) Dennis was still trying to get the old tourniquet comics out there and we both now had print on demand services available, the miracle of modern technology. I was trying to come up with a new idea for my character and while reviewing different comic books where the main character’s wind up in Hell (Hellboy and Big Trouble in Little China’s Jack Burton,) I thought that I should have Karl Vincent wind up in Hell. I told Dennis about the idea and he related to me that about ten years ago he had worked on a story where the main character must get out of hell to stop interdimensional Armageddon between earth and another planet. The project was abandoned and he had these pages that he put hard work into just lying around. He sent me the pages and I had enough for an entire graphic novel. The main character is disfigured while he’s in hell but when he gets out he’s normal again. Dennis had to touch up the main character to make him look like Karl and then voila! Instant Karl Vincent graphic novel. I’m very please how it turned out and so far, the Indyplanet version is the best version that we have. The cover price is under $8.00 Black and White and I hope to have a color version soon.

Click on the links to find the graphic novel and here are a few pages to give you a feel of what the story is like. All Karl Vincent: Vampire Hunter novels available on Indyplanet, Kindle, Amazon. Find the page on Facebook and click like!