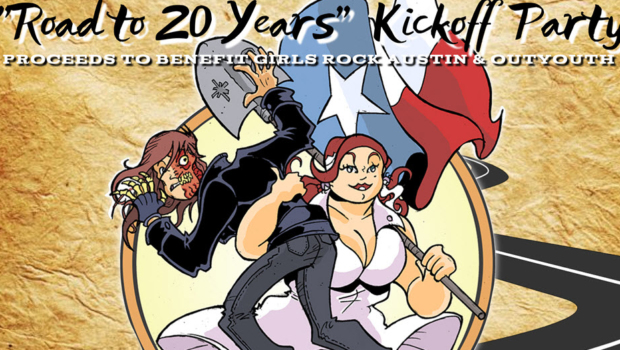 “Funny to say this comic book saved my life, but it really did,” says Drew Edwards, creator of the comic book series “ Halloween Man .” First published October 31st, 2000, the Adventure/Horror series follows Solomon Hitch, a half-man, half-zombie superhero with the power of the horror movie sequel; so he always comes back! Along with his sassy scientist girlfriend, Dr. Lucy Chaplin, they battle everything from vegetarian vampires, steampunk mummy-pirates, the Loch Ness Monster, and even the Invisible Man. Their universe is centered around Solar City, Texas; a retro-futuristic metropolis, built on the ruins of the old Dallas metroplex.

With a subject so zany, you might not ever realize that the man dubbed “Howlin’ Drew Edwards started writing Halloween Man to deal with the untimely death of his 20 year old identical twin who had just revealed their plans of transitioning to being a woman. On the way to their parents’ home in Plano in June of 1999, a drunk driver ran a red light, hitting the passenger side of Drew’s car, killing his twin. This
past June marked 20 years since the accident. To honor his twin and deal with the extreme grief, guilt, loss and resulting mental illness from the trauma of the accident and his twin’s untimely death, Drew found solace writing the adventures of Halloween Man, a concept he and his twin had come up with
together because of their shared love of comics and all things Horror.

Halloween Man’s creative team is comprised of artists of various racial, gender and sexual identities from all over the world, proudly reflecting the diversity of the Halloween Man universe’s cast of characters which have garnered the attention of NPR, Broken Frontier, Rue Morgue, and VolUp2 Magazine. In 2018, Edwards was awarded the title “Best Comic Writer/Creator” for the Austin Chronicles “Best of Austin.”

Saturday, October 19th, to commemorate 19 years and over 100 issues of his original Texas comic book       series, Edwards is throwing Halloween Man Comics’ “Road to 20 Years” Party at Flamingo Cantina with an inclusive lineup of bands and artists, featuring women, members and allies of the LGBTQIA community, plus games, door prizes and a costume contest. Proceeds will be donated to nonprofits, Girls
Rock Austin and Outyouth. Tickets available at https://halloweenmancomicsparty.eventbrite.com.