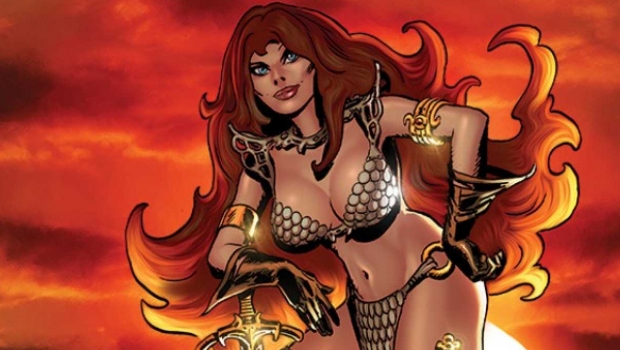 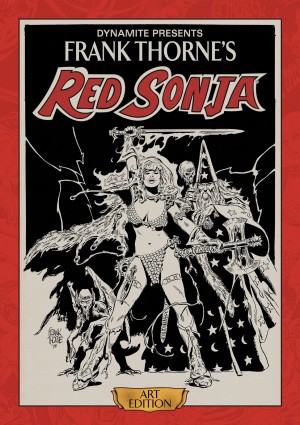 He wasn’t the first artist to draw Red Sonja, Hyborean Age “she-devil with a sword” and equal to Conan the Barbarian, or the first to render her in her iconic chainmail “bikini,” but Frank Thorne was certainly the one who gave Sonja her incredible sex appeal, and made her the popular character that she remains to this day. When he was done illustrating Sonja’s adventures, he went on to create characters of his own, the most well-known of them being a pornographic version of the she-devil: Ghita of Alizarr, star of a series of graphic novels. And today is the maestro’s 84th birthday!

Back in 1988, before I created my redheaded succubus character Lorelei, I took an art class from the talented Mr. Thorne. It was titled “How to Draw Women the Frank Thorne Way.” At the time, Thorne was teaching at the Joe Kubert School, so he’d agreed to hold this two-hour class/overview of his comic career at the con. After a slide show that highlighted his projects—from The Illustrated History of Union County (a comic strip he wrote and drew when he was nineteen!), through Red Sonja, to Ghita of Alizarr—Thorne handed out pencils, erasers, Bristol board art paper, and a copy of an old Sonja script. Our assignment was to each draw a page based on the script. But first…

“Okay, time for the lessons. Before we get started, are there any women in here?” He looked around the room, which wasn’t really necessary—the room wasn’t that large, and there were only about a dozen of us in attendance. But no, there were no women present.

Thorne nodded and held up an index finger. “Okay. Lesson one:

Today, it’d be called a WTF moment. There were small gasps; eyeballs bulged from their sockets in complete shock; you could’ve heard the proverbial pin drop. It was as though your kindly grandfather had turned into the dirtiest old codger on the planet. And he wasn’t finished.

I won’t complete that sentence; somebody has to think of the children. 😉 But if you run into me at a convention, and you’re of adult age, feel free to ask what he said. I’ll be sure to run before you throw that angry, PC-weighted punch.

To this day I forget what lesson three was—I think I was so busy reeling in disbelief from Thorne’s surprising choice of words for the first two that #3 went in one ear and out the other. But y’know what? Lessons one and two were enough to leave a lasting impression on me (obviously, if I’m telling this story over two decades later), and if you’ve ever seen my Lorelei art, I can honestly say that Frank Thorne taught his students very well that day…

At the end of the class, Thorne held a graduation ceremony. In lieu of diplomas, we all received copies of two 1970s photo posters: one of Thorne in full wizard gear; the other of him posing with Red Sonja—in this case, a cosplaying Wendi Pini, who later went on to co-create the fantasy comic Elfquest.

I had two other encounters with Mr. Thorne, the first in 1990, when he did a Lorelei sketch for me while I bought a copy of the 45rpm record “The Ballad of Red Sonja,” recorded in the ’70s at the height of her popularity (and honestly, a terrible, terrible song—but Thorne’s sleeve art sure was nice). The second was in 2002, when I commissioned a cover illustration for Lorelei, Vol. 2 #2—at last, the artist who’d inspired me was drawing a character whose design had been influenced by his unique style. The circle was now complete!

(And folks, if you get the chance, check out the oversize Frank Thorne’s Red Sonja—Art Edition, Vol. 1–2 from Dynamite Entertainment. They reproduce his original Red Sonja art from his Marvel Comics days, right down to the white-paint corrections and hand lettering. Also track down copies of his fascinating two-volume autobiography: Drawing Sexy Women and The Crystal Ballroom.)

Steven A. Roman is the bestselling author of the novels X-Men: The Chaos Engine Trilogy and Blood Feud: The Saga of Pandora Zwieback, Book 1, and the graphic novel Lorelei: Sects and the City. Follow his adventures in self-publishing dark-fantasy books, comics, and graphic novels at his company, StarWarp Concepts.