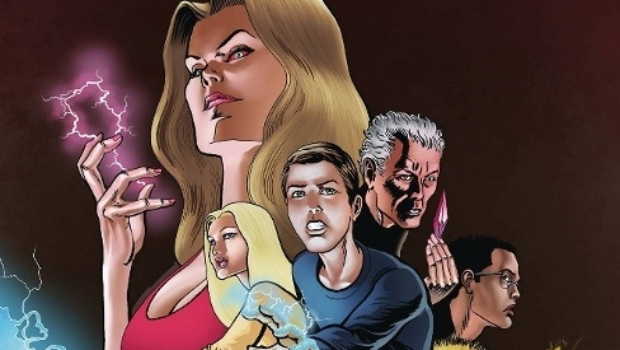 Hell High; about high school and the Principal being the Devil

Did you ever think your high school principal was the Devil? Well, Cary Anderson (writer/director of Extra School, Chad and the Alien Toupee and Reformed Tramp) did and he wrote about it in a fun, action filled graphic novel called HELL HIGH, with stunning visuals by Eliseu Gouveia, who also handled Palmiotti’s Cloudburst, Stargate Universe, Lorelei, Vengeance of the Mummy (2005) and more.

Charlie Albert is your typical high school senior. He isn’t a jock, the smartest kid in class or the most popular but he is a pretty good guy in a private school in DC that caters to the children of our nation’s leaders. So Charlie has a crush on Heather, the most beautiful girl in his class – who happens to be the President’s daughter.

So things aren’t going great for Charlie and then a new principal comes to the school after the old principal was killed in a horrific and bizarre accident. Principal Frye is gorgeous and charming… and a little odd. She soon takes Charlie under her wings and Charlie’s life changes. Suddenly he is great at sports, great in his classes, popular and looks to be winning over Heather. Life is going great until he realizes Principal Frye is the Devil and she is using him to get to Heather and her dad.

Now Charlie, with the help of his best friend and a reformed demon is on a quest to find weapons to battle the Devil and stop her plan to destroy the world.

High school always seemed like Hell, but for Charlie it really is.