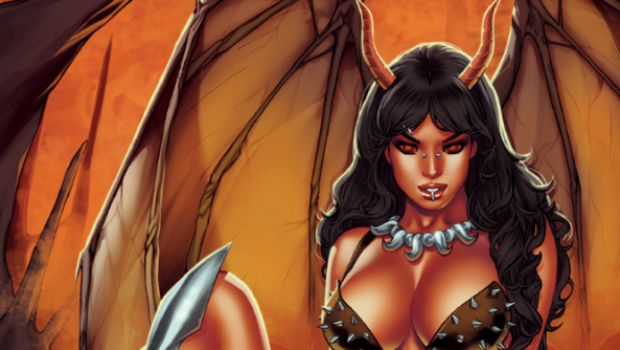 Are you a fan of over the top comics? Mature content? Then I’d like to introduce you to an all-new, 48-page original graphic novel entitled Hellwitch: Hellbourne #1, featuring Lady Death’s newest nemesis Hellwitch!

Hellwitch wasn’t always the savage, cruel and sensual Hellbourne leader she is today. In this origin story, Hellwitch begins life as a lowly hatchling, the lowest caste in the magnificent Hellhive, destined forever to be a pit slave, discarding body parts in the pain pits. But, through sheer drive and determination she rises through the castes to become a warrior, to take a lover, to gain respect.

But the hive queen takes notice and makes Hellwitch’s life an unbearable Hell.

Can a lowly rebel pit slave topple a mighty hierarchy out to crush her?

You’ll have to read Hellwitch #1 to find out. Featuring nudity, sex, violence and lots of anti-social behavior!