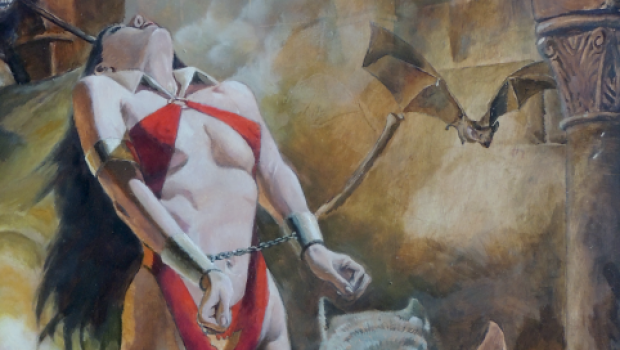 Interview: JG Jones talks about art, Vampirella and a future!

JG Jones is a legend in the scene, be it for his amazing coverwork for Red Sonja, Y: The Last Man, 52, Wonder Woman and others or for his interior party-to-the-eyes on titles like Black Widow, Mark Millar’s Wanted, Tucci’s SHI, the amazing must-read/must-have Painkiller Jane/Darkchylde or the OGN Wonder Woman: The Hiketeia or the Before Watchmen: Comedian.

Man o man, when I heard JG Jones was feeling tired and not-ok, I was worried, but when word got out he was “really sick” it gave me a pit in my stomach? Why? Cause I only met him and his wife once, but they both had a big first impression. I had seen loads of artists dropping in at FACTS (comicon I had been artist alley mgr for 12 years) but JG Jones was one of those fine folks that gently move between “friendly” and “gentleman” which is a real treat.

I am very, VERY happy that he is getting back into the art-world yet again and even working on a personal project, but he had a hard road behind him. I can only imagine….

Underneath this intro is an image of VAMPIRELLA: it is a cover to a special comic Dynamite is publishing with all profits going to JG Jones! Click on the image or on this link.

Q by ComicsForSinners: My personal moment of glory to discover Vampirella was back in 92 when I first entered a Dutch comic book specialy store (which I never knew existed in the Netherlands before that) and discovering the Amanda Conner/Jimmy Palmiotti/Mark Millar series and then go back to the older stuff as well as getting all I can get my hands on from that day on. And basically I think I have all colored stuff (Dark Horse, Harris and DE) and also a fair game of Warren Magazines (still waiting on Dynamite to get their softcover omnibus into a second volume!!) to satisfy me with!

Since I was a kid, I have always loved the beautiful artwork in the old Warren Publishing books, Eerie, Creepy, and Vampirella. Artist like José González, Rudy Nebres, José Ortiz, covers by Sanjulian and others, but I wars’t allowed to read such “trash” in my house, so I had to sneak the books in and hide them. I would also read them at the grocery store magazine rack while my Mom was shopping.

At one point, I saved up my pennies and bought the old Aurora plastic Vampirella model kit, which I painted and kept with the other monster kits in my room.  One day, my Dad found it and I was in huge trouble. Part of my punishment was being forced to destroy the offending Vampirella.

But I always loved the character and wanted to draw or paint her.

Q by ComicsForSinners: ooo that sounds like a tough break but glad to hear you came out on top! I happen to think that ALL the greats at one time have worked on or with this character, from Jusko to David Mack, from Millar to Morrison, from Amanda to Bair, from Sniegoski to Golden… I am truly happy you are among those! Is this your first Vampirella-cover?

Q by ComicsForSinners: How did you come up with this piece and I mean the stance, the style used and such? It oozes Sanjulian and Warren-era covers to be frank!

Well, I couldn’t ask for a better setup than that! I had been looking at the new Sanjulien art book with all it’s great Vampirella paintings, and I did a small watercolor study for a Vampi cover of my own. Nick at Dynamite saw it, and asked if I would be interested in doing a painted cover. I said, “Sure, as long as I can paint it in oils, just like the Master.”

Q by ComicsForSinners: another fan-moment… do you collect comics yourself? If so, which titles you like?

I don’t really collect comics.  I gave away all my old comics I had as a kid.  They were destroyed from reading and rereading, and had no monetary value.  I thinks some of the only comics I kept were my old Marvel Planet Of The Apes magazines, and the Death of Gwen Stacy issues of Amazing Spider-Man.

Q by ComicsForSinners: now the elephant in the room… why were you out of commission for such a long time?

I had one of a  suite of rare diseases called myeloproliferative neoplasms, polycythemia vera, which I lived with for over a decade. A few years ago, it rapidly transitioned to the much more serious myelofibrosis.  I knew that I had to do something about it, and so I was able to find a donor and I had a stem cell transplant to cure the bone marrow cancer.

It’s been two and a half years, and the recovery has been slow but steady.

Q by ComicsForSinners: Are you currently able to even work at all?

I have been back at work for a while now. I have been painting cover for a number of different companies, working on my new original graphic Novel, and also doing a lot of work for Voices of MPNs, to raise awareness about Myeloproliferative diseases and their treatment.  They are very rare diseases, and not a lot of folks know about them.

Q by ComicsForSinners: is there a place where folks can read more about this?

Sure. If you want to read my interviews with other people with MPNs, and see the watercolor portraits I have painted of them, check out

Q by ComicsForSinners: Thanks for that link, mate! The personal stories match with your intricate art…. How is your near future looking?

Busy! I have loaded myself up with work, and I’m loving working on my own pet project. I’m trying to finalize a publishing deal for that now.

Q by ComicsForSinners:For the love of all that are comics… do tell me a tad about your current plans, send over stuff you can share and talk about and let me know about your personal project as well !! Tease me and tell me if it will have a female lead or male lead at the least 🙂

A by JG Jones: The Original Graphic Novel is a period piece set in Oklahoma  during the Dust Bowl. It’s bloody and violent, though maybe less so than Frank Miller and Geoff Darrow’s Hard Boiled. I painting the entire thing, though I’m keeping it monochromatic, like sun-faded old photographs.

It’s a story I wrote with my pal, Phil Bram, a number of years ago, and now it’s going to be my full time job. I’m super thrilled to finally bring this story to life!

Q by ComicsForSinners: love Phil’s last name, since it is the first name of my oldest son! This looks like a winner, Mister Jones!

THANK you for giving me a few moments of your time and do take care!

Thanks to Vincent over at Dynamite for setting up this tribute to one of the greatest artists there is in comics!