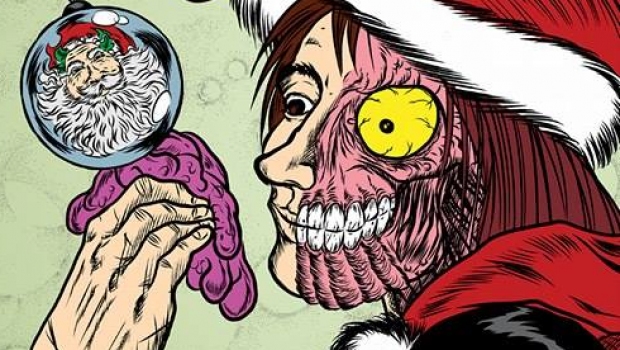 C4S set out to interview the man of the hour, the creator of the Halloween Man, Drew Edwards as Halloween Man meets up with Santa this Xmas-Halloween crossover. And who out there does not enjoy Halloween ánd Christmas?!

Drew, you have been going on how long now with your Halloween Man series?

DREW EDWARDS:We’ve been publishing seventeen years as of this last October.

It has been a long time, man! And the quality remains top notch!. I just cannot believe the luck you had in crossover with one of my personal favs, Hack/Slash! I know you have been asked this before, but for the visitors of C4S do tell again!

DREW EDWARDS: Tim Seeley and I have a mutual friend in “Hamster Rage” creator, Brian Crowley. He was the one who got us talking. The whole thing grew out of email exchanges and chats over social media. Tim and I have similar tastes and the two comics fit together very naturally. Years later, it still seems like a big fan favorite, which I am very happy about. It was a wonderful experience.

Many artist you have worked for are now moving on the the big leagues. You basically help start their careers, right? How does that feel?

DREW EDWARDS: It feels great! Sort of like I’m the Roger Corman of comics. I’ve really loved seeing Nicola Scott on Wonder Woman and knowing I had a tiny part in helping accomplish her dreams. It’s also really humbling though, because I don’t really see myself as a career maker. But I do think Halloween man has been a really good place for new talent to build their craft. I’ve been very lucky to work with some super talented people.

Halloween Man’s girlfriend Lucy Chaplin has changed in appearance over the years. Can you tell me more about how that come about?

DREW EDWARDS: Lucy was originally a more slim-line, traditional looking superheroine. I always however, envisioned her as a full-figured woman. When Halloween Man made the leap onto the ComiXology digital platform, our second story arc “Eye of the Beholder” really centered on that. Through that story, we transformed her into a plus-sized powerhouse and she has remained that ever since. At that time the body positivity movement had really started to become more mainstream. So, the idea of a BBW superheroine was something that a lot of readers really latched onto. I know the entire creative team was really gratified by the response from both people in the comic book industry and beyond! It remains the best selling issues of Halloween Man by a considerable margin. 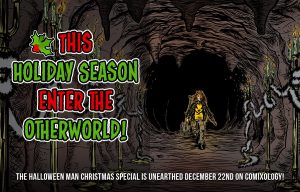 So this Christmas story, basically: what whére you thinking?

DREW EDWARDS: I love Christmas themed horror movies and bittersweet holiday specials like the ones Dr. Who does almost every year. So, it’s always been my intention do a Christmas special. Now, I’ve done Christmas stories before, but those were more stories set around the holidays. This one was more “all-in” because it has Santa Claus in it and the whole nine yards.

I’ve always thought the holiday season is kind of spooky anyway. You have the colder,overcast weather, all of the blinking lights, and well, you can’t think about “A Christmas Carol” without talking about ghosts.

Of course people get a certain perverse glee when you mention that there is going to be a “Halloween Man” Christmas Special. So, this is one for the misfits out there, who want something a little different during the holidays.

In reading the start of this story, you get this mega-emotional storyflow in those first pages. It really packs a punch. I am not used to that deep a feeling from a comic book. So do tell me about the backstory of this sequence?

DREW EDWARDS: The seed of this story goes waaaaaay back. It’s very loosely based on an Irish folktale about a man going into the underworld to save his wife. It was suggested to me over a decade ago by my old art director Jesse Farrell as a possible story concept. At the time I was mostly focusing on movie monsters and pop culture based villains. I was trying to avoid our comic from being compared to Hellboy, something I’ve always had to fight tooth and nail against. Something about this struck me as kind of veering into Hellboy’s turf, so, I just sort of put the idea at the back of my mind.

But things have a way of coming full circle. More than a year back a good friend of mine lost her father to cancer. They had a really great relationship. They were probably the closest I’ve ever seen a father and a daughter be. Seeing her grief around the holiday season really hit home, as I’m someone who has had my fair share of loss. So, the story popped back up into my mind and I used it to process seeing my friend hurting. This comic has always been a form of therapy for me anyway.

I am really proud of how it all came together. I think script hit a lot of the right emotional beats, but the art by James Figueiredo and colors by Dan Conner created something both haunting and “Seussian” at the same time. This is probably the “prettiest” Halloween Man comic, though that might be a strange thing to put out there. Which isn’t to say there haven’t been other stunning Halloween Man comics, but this has a certain “Christmas lights” feel that sits well with a holiday tie-in.

Did Finn Bheara, the mad faery king, have a certain background in your mind? It seems a far step from the faeries in my personal (vivid) imagination, that is for sure 🙂

DREW EDWARDS:The story title “Fairy Tale” comes from the famous Pogues song “Fairy Tale of New York.” However, the character of Finn was inspired mostly by King Finvarra, from the fairy king from Celtic mythology. I took a lot of creative license naturally, so don’t think of this as ripped straight from Irish folklore. I was also strongly influenced by the Candlemaker from Morrison’s Doom Patrol. To the point that I made sure Jame’s used that in his design, with the crown on candles on his head.

I wanted something that would feel seasonal and tie into this idea of Christmas elves. A figure that was whimsical but also seemed like he could stand toe to toe with Solomon. He had to be both funny and scary.

I loved the ending of Solomon’s solo adventure, by the way. That last page is just brilliant, might I say!

DREW EDWARDS: We couldn’t very well not have Halloween Man not properly meet Santa Claus could we? That’s sort of the payoff to the whimsy throughout the tale.

So, Solomon had his moment to shine and in the second story, you show what his girlfriend, Lucy is up to that same night. All action, beauty, brain and bosom, right?

DREW EDWARDS: To that point the artist on that one, Kevin Richardson does a great version of Lucy, who is both buxom and brawny. I think fans will be very pleased.

I noticed Solomon wasn’t in this story. Why did you choose to do that?

DREW EDWARDS:The idea behind the special was always to show that they were both in different places on Christmas Eve. I actually wrote this story years back and retooled it for the Christmas special. Lucy has grown in popularity so much over the years, I really wanted to give fans a taste of what her full solo special will be like. So, Solomon was excluded from the rewrite and Lucy’s cowardly, mortal pal Forrest was subbed in his place. They have a much different dynamic that is both very real and funny at the same time. Since “Fairy Tale” is a little more bittersweet, this more of a straight up action comedy. Like a mini-version of Die Hard, but with some very “Grinchy” looking orcs.

What was your purpose in having Forrest Spextre not be the hero, as opposed to Lucy who saves the day?

DREW EDWARDS: I don’t know that there is a purpose to that beyond it being comedic. Forrest is acting in accordance to his character, which isn’t heroic. Although he hasn’t appeared as much as some of the other Halloween Man supporting characters, Forrest is pretty consistent in his behavior. Which is to say, he’s a selfish jerk with a crush on Lucy. His affection for Lucy is probably his only humanizing trait. Not everyone gets to be a hero and Forrest just isn’t that guy. He wishes Lucy was less interested in heroics as well. I just think he’d like her to dump Solomon, marry him, and live a more normal life. Thankfully, Lucy has other plans.

So,we all want to know: what is next for Halloween Man?

DREW EDWARDS: Well, we have our 17th issue coming out very soon hopefully. That will finally conclude the “American Nightmare” story-arc in a big way. Also, we have our Lucy Chaplin: Science Starlet special finally dropping some time in Feb, which we are all very excited about. 2018 is looking to be a good year for Halloween Man fans.

In the mean time, the Halloween Man Christmas Special goes live on Comixology December 22nd! TODAY THAT IS!!!!