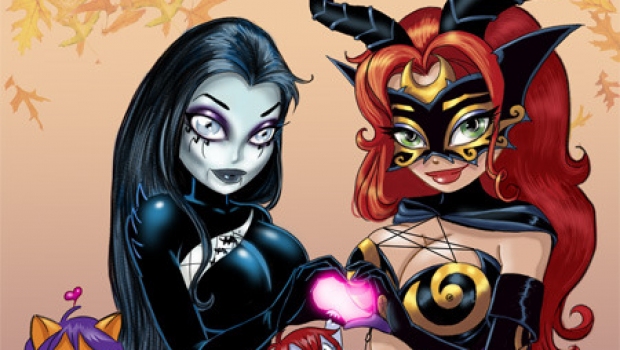 From the minds of Jim Balent and Holly Golightly! 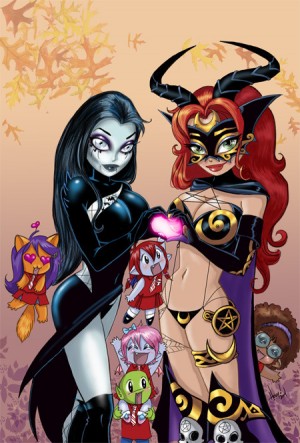 This is the FIRST time TAROT WITCH OF THE BLACK ROSE & SCHOOL BITES books have done a crossover! Adventure, Fantasy, Laughs!

What Inspired this Kickstarter Project?: It started with a bubble bath meeting!  Jim said, “Ya know we should do a crossover of our characters!” so I said, “SQUEE!”

The fun would be to see our characters from a whole different perspective! Jim would draw my School Bites gang in an action packed battle that you’d never see in my books and I would put my lighthearted touch on Jim’s Tarot characters! This would all be tied together in a fun PG-13 fantasy adventure filled with Magick, Fangs, giggles and Danger! And because Jim and I are drawing it, a good helping of sexy gals…and Imp.
For sometime now, Jim and I have been getting many many requests for us to create a new Kickstarter…and so I thought, since this is the FIRST EVER Crossover of Tarot and School Bites, that this project is Special enough to create an exciting Kickstarter where we would make exclusive goodies for all you Readers that have been enjoying both our projects- Tarot, Witch of the Black Rose, now for 15 years and School Bites, a lil’ over 10!

The Tarot/School Bites Crossover will be a 32 page Full color comicbook.
Jim and I will both be writing and illustrating the adventure in a variety of  styles. Action/Adventure, Manga, Realistic and Chibi, will all be used to relay this tale of two titles!

So with your support, we will create, not only the Crossover event- But Exclusive Covers, Artwork, All new Pin Up book, and other goodies JUST for you who are backing our United Endeavor