Beginning in September, Joe Jusko, in conjunction with ERB, Inc. will b..." /> Joe Jusko to Create Cover Art for All Burroughs Novels – Comics for Sinners
News

Joe Jusko to Create Cover Art for All Burroughs Novels

Beginning in September, Joe Jusko, in conjunction with ERB, Inc. will be creating brand new cover art and frontispieces for every Edgar Rice Burroughs novel (over 80, in total), forming the first completely unified Burroughs library by one artist.

The pantheon of incredible talent who have loaned their vision to cover ERB’s works over the years is a veritable Who’s Who of high fantasy art, including J. Allen St. John, Frank Frazetta, Roy Krenkel, Michael Whelan, Neal Adams, and Boris Vallejo, and many others. While several, like Frazetta, have produced an incredible wealth of imagery over many series, no one artist has illustrated every single volume.

Jusko laid the foundation for this groundbreaking project in 1995 with his 120-painting Art of Edgar Rice Burroughs trading card set produced by FPG Publishing. According to Jusko, he has dreamt of this project ever since.

“I remember marveling at the Tarzan covers by Adams and Vallejo, as well as the Mars covers by Whelan way back in the late ’70s when I first broke into the business, wondering if my work would ever reach a level of respect where so prestigious a commission would be afforded me,” Jusko said. “I’m still pinching myself that the day has arrived, and I cannot thank ERB, Inc. enough for the wonderful opportunity! I’m picking September 1 as my official start date as it’s both my and Edgar Rice Burroughs birthday. How much more karmically charmed can this project be?” 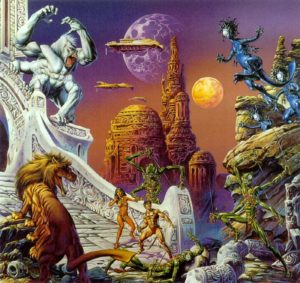 “We’re excited to be working with Joe on this historic project,” Jim Sullos, President of Edgar Rice Burroughs, Inc., said. “Joe’s association with Edgar Rice Burroughs has already produced an extraordinary body of work, and we look forward to sharing this project with new generations of Burroughs readers.”

Edgar Rice Burroughs, Inc. was founded in 1923 by the author to manage the rights to his literary works. He is renowned for his many novels of fantastic adventure, particularly his creations of Tarzan of the Apes and sci-fi hero John Carter of Mars (both first published in 1912). The company has overseen every adaptation of his literary works in publishing, film, television, theatrical stage productions, licensing, and merchandising. ERB, Inc. continues to be owned by the Burroughs family and remains based in Tarzana, California, the city named in honor of Burroughs and his famous character.

An industry professional for 40 years, Jusko has worked for almost every company in myriad capacities. His work has earned him many awards and honors, including two “Favorite Painter” Wizard Fan Awards, multiple trading card awards, a Golden Lion Award from the Burroughs Bibliophiles (previous recipients include Frank Frazetta and Boris Vallejo) and a Chesley Award nomination for best cover in 2001. He was awarded an Inkpot Award at the 2012 Comic-Con International for his contributions to the comic industry. His original paintings are held in collections worldwide.

The first six books in the Tarzan series are slated for release during the 2018 winter holiday season.