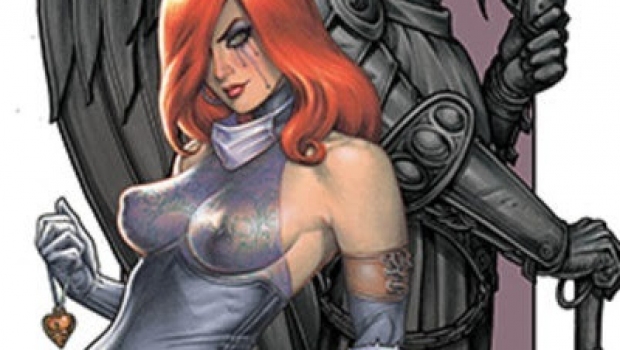 Not only can you snag the pair of beautiful statue busts of Vampirella and Dawn as designed by Joe on Indiegogo, but there are so many other JML goodies to grab!

Any of Joseph Michael Linsner’s fans know that he and his wife/creative partner in crime Kristina make it to many conventions all around the country and work their butts off meeting with fans, offering sweet original art, and more. Unfortunately in today’s crazy world, our beloved comic conventions have been missing in action. In fact, it was just announced that San Diego Comic Con for this year has been canceled. At least the in person part.

However, Dynamite partnering with Joe, are now able to offer a lot of his convention staples in this Indiegogo. “As we continue to work with creators to help them connect with fans and bring in money while conventions are not happening. This campaign is the first stop to go to get yourself a copy of Joe’s latest sketchbook. These beautiful volumes compile all kinds of diverse and beautiful artwork that he’s done over a full year.“

For the ultimate collectors and art fans, there are even options to get very rare and coveted original one-of-a-kind artwork from Joe. Only 3 lucky fans can get a unique drawing of Joe’s signature Dawn at full 11 x 17 inch scale. Or how about a sketch cover of Dawn or Vampirella? Or something even smaller that you can take everywhere in your wallet – a sketch card! Best of all, lock yourself in on these reward tiers and of course you also get the new statues! For unbeatable pricing on such a valuable haul of artwork from one of comics’ greatest creators!