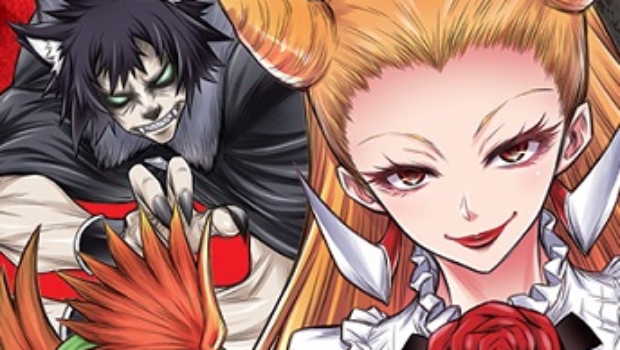 The series depicts the exploits of 12 supernatural fighters embroiled in a tense fight to the death and is based on the hit Japanese light novel by the prolific multi-genre author NISIOISIN. The novel was also adapted into an anime of the same name.

JUNI TAISEN: ZODIAC WAR is rated ‘T+’ for Older Teens and features story and artwork by Akira Akatsuki and character designs by Hikaru Nakamura. The series will be published in print under the Shonen Jump imprint with an MSRP of $9.99 U.S. / $12.99 CAN, and will include a full-color fold-out poster. JUNI TAISEN: ZODIAC WAR also launches digitally on October 2nd via viz.com and the VIZ Manga App, as well as on the Nook, Kobo, Kindle, iBooks, comiXology, and Google Play stores. Future English editions of the 4-volume series will be published on a quarterly basis.

Every 12 years, 12 fighters take the form of the Chinese zodiac and engage in a battle royale. With their strength and mysterious powers, they fight to the death and the sole survivor is granted the ultimate prize – any wish.

The JUNI TAISEN: ZODIAC WAR novel is also available in English in both print and digital editions published by VIZ Media.

In 2002, author NISIOISIN’s novel, The Beheading Cycle, won the 23rd Mephisto Prize and became his debut publication. His other notable works include the Zaregoto series, the Monogatari series, the Densetsu series, and the Bōkyaku Tantei series. NISIOISIN also wrote the manga tie-in novel DEATH NOTE: ANOTHER NOTE. As a manga writer, he has appeared in the Weekly Shonen Jump magazine with his series Medaka Box and his Ōgiri series of one-shot manga stories have been featured in the pages of Weekly Shonen Jump, Jump Square, Weekly Young Jump, and Bessatsu Margaret.

Born 1984, illustrator Hikaru Nakamura made her debut in 2001 with her manga Kairi no Sue in the Monthly Gangan Wing magazine. Her other works include Arakawa Under the Bridge, published in Young Gangan, and 2009 Tezuka Osamu Cultural Prize winner Saint Young Men, published in Monthly Morning Two. She previously collaborated with NISIOISIN for his Ōgiri series with “The One Wish I Really Want to Come True, and the Ninety-Nine Others I Don’t So Much.”

Born 1977, Akira Akatsuki made his manga debut in 2003 with Z-XL Dai in Akamaru Jump. He later published a number of one shots, such as Angel Agent, Contractor M&Y and Little Brave Pukateriosu, in Jump the Revolution!, Weekly Shonen Jump and Akamaru Jump, respectively. His most notable work and first major collaboration with NISIOISIN, Medaka Box, premiered in Weekly Shonen Jump in 2009 and concluded in 2013. He published two more one shots, Toshokan Kyuuseishu Kurabu (Library Savior Club) and Musume Iri-Hako (The Girl in the Box), the latter of which was another collaboration with Nisioisin, before starting work on Juni Taisen: Zodiac War in 2017 on Jump+.