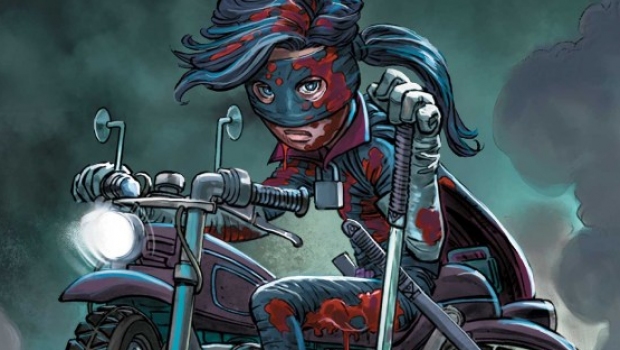 This is a hard nut to crack, a tough book to review… why? Everything is summed up nicely in the synopsis, really…

Hit-Girl spins off into her own blood-soaked saga!

Mindy McCready attempts to settle into life as a regular schoolgirl, but desires nothing more than to be dispensing hot justice to the scum of New York City. Her mother thinks she’s doing her homework – but in reality, she’s taken Kick-Ass on as her sidekick. She’s training him up to punch, shoot and stab – just like Daddy would have wanted. And in return, Kick-Ass is helping her learn to survive middle school – without spilling anyone’s blood. But when Kick-Ass gets benched, leaving Mindy to take on the mafia solo, even Hit-Girl may be in over her head. Meanwhile, Red Mist pursues his goal of becoming a super villain – and faces a final test of his own.

There you have it. All is said and done. Beware, the book comes with a 16+ rating.

Oh wait… I can talk about Mindy’s gut-wrenching feelings as she is trying real hard to be ‘normal’ and how sometimes kids can be ever so cruel. Or shall I talk about the love of Marcus, stepfather to Mindy, for Mindy’s mother, trying to walk the line of most righteous human being? I can also discuss how this book is not remotely about Kick-Ass, but all about the struggle for Mindy to be normal and to have her accept her stepfather together with accepting her own self, her own being and her own upbringing.

I really do not want to talk about Red Mist, because he is a true wanker! I am sure he will be of great importance in the other books (this HC is the second collection, and the total read will be completed in four books) but he is a wanker. Period. I do love the way Millar is making him a wanker and how Millar in the midst of it all, also addresses social situations and thought-through adult themes.

Having Mindy grow up during the pages of this series, is a treat, for sure. Adding to this as well is an immensely gore-party, which is simpley is stunning, since it reads as awkward yet interesting as Red Mist is a wanker. The gore-party involves many thought-provoking ways of killing people. Ways that make me wonder about the sanity of Millar himself, but the truly heart-warming story about Mindy makes the INsanity of this comic, a true tribute to Millar, since the mixing of both is just pure genius.

Did I forget the art-team? Could Millar have pulled this off without the cartoony work of Romita Jr.? Or the lush finishes of veteran Tom Palmer or the more than standard coloring by Dean White, making this book worth every dime?

These artists are doing such an amazing job that leaving just one of them out of the equation would be felt throughout the 4 books totalling the story of Kick-Ass!