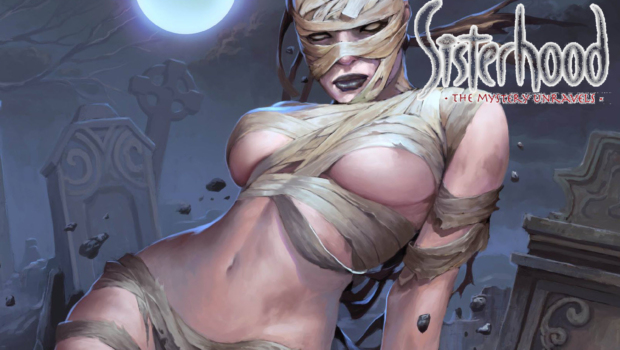 Kickstarting A Comic: the dream, the hardship, the team, the fails, the tribulations and more…

At this point in time, both my projects SISTERHOOD and SHEVA are reaching the point of sending out the packages and I am sure I will reach a few more learning moments in time to come, but perhaps it is fun and/or interesting to look back at all that transpired so far and see if it gives readers some insights in the process or perhaps backers will absolve me of my tardiness in this project.

Going back I had it all planned out, at least that was what I thought…

Years ago I started developing the comic Sisterhood and at that time I had not enough time to start writing full-time (starting up my Art Agency… I failed at making that a full-time gig by the way J )  so I had help. Buddies wrote stories and I wrote some short stories. Interior art was coming in left and right and I had not to worry about covers, because some of the most talented artists in the business had given me permission to use the art they gave me for my help right or left.

And then my life became unstable which meant I had no base to start the comic without losing all money I might scrape by. So I started procrastinating until I find the right moment… and yeah that will be never!

In the meantime I did start up the Social Media platforms, with mostly Facebook leading the way, but later-on adding Twitter and Instagram, which I thought was a good idea. Even though more and more requests came in as to when it would finally be “the moment”.

So late 2019 I decided it was time to stop procrastinating and I finally took the excruciating step to fill all the fields on a Kickstarter page. And accidentally hit LAUNCH even. No joke there!

I was really planning on lingering some more about it, and actually thought the button was to set a date/time for launch, but… o well, it went crazy after that, meeting the goal in 24 hrs!!

I had no idea I was this loved, this adored, that I had this many fans!!

And that was my first big mistake.

I had to tell myself this had nothing to do about me. It was about a beautiful project, with stunning art and a cool premise. And sexy variant covers. Period. Which is basically good enough for me. I mean, I am not Kirkman or Millar, shepherding a new project. This is my first project and even though I am the projectleader, and I had almost all art in, and I felt confident to “walk the walk and talk the talk”.

Which was my second mistake!

I might have thought I was the projectleader and surely enough I have been working around the clock to make sure I had all the puppets in place, all the art was in and the remaining tasks set with a solid understanding of time and effort.

But life… it has a funny way of reminding you that arrangements are not solid as a 1000-year-old rock nor can you know what it means to actually BE a projectleader and (dare I say it) publisher until all the puzzle pieces are laid out on the table and you realize there are pieces missing!

I was blessed by being surrounded by amazing professionals, which perhaps made me more cocky then was good for me. I had a colorist from France, that could work miracles, with whom I had worked for five years without a hitch. I had this story-editor from Germany, who had tips and tricks for me, which I only truly recognized after the project was 6 months late. I had a letterer in Brazil who told me to give him the script without truly proofreading the story myself first. That sums up my lack of insight as well as my power of ‘being at ease’ remarkably!

But the Kickstarter went great, and I decided to do IndieGoGo Indemand while waiting for the money from Kickstarter coming in. I did this without listening to the advise of many, who told me to not do this. I am glad I did this since every extra $ I made, was just that: extra!

And I know I am no Tucci or EVS let alone Pulido and I am not going to make that first 500,000$ on my good looks alone, but I can daydream, can I not?!

And when Kickstarter announced the 100 Project, I decided to jump on this as well, since it matched what I wanted to do for a while, but now I had the platform to broadcast it best. And it was also a massive success! All the while I could add more rewards and had the opportunity to produce trading cards, oversized cards, prints, metal prints, bookmarks, wooden prints, glass prints, plastic coins and merch for the next Kickstarter!

And so the project ended, with a big win on every front and I told the colorist to just GO FOR IT, thinking it would be done in early January, with the letterer doing the work after this, with me going to print in February and shipping in March.

It all felt so easy at that point that I even decided to help out a buddy of mine, launching the first issue of the ZEU LIBRARY, being Jungle Queen Sheva. It did not launch as great as the Sisterhood but it did ok, met the goal and I was confident to hit the deadlines since artist Eliseu Gouveia had already finished all art, coloring, lettering and whatnot.

This was in hindsight the most little mistake!

O well, it was not really a mistake, since I was still waiting on the colorist to turn in the last pages, which took forever. So I could have fun with all the Sheva merch like trading cards, prints and bookmarks, while waiting…

Yet the waiting, it became tedious at a certain point. I have complete and utter faith in the skills of my colorist but of course hated the fact his rough moments in life coincided with my first project. I cannot blame him for this, but it was not a fun ride, I can tell you that.

Once the colorist was finally done, I think we were 4 months late.
So then I send it to the letterer, who just happened to lose part of his eyesight and his wits, at that exact moment as well. Once everything settled there and all was said and done, I got the files back and you might have guessed it: I should have read the script myself much closer.

Mind you, this was not my first time as editor. (Comicvine has proof ) I have worked on 30 titles editing after all was lettered, and translated 22 books, which I also had to edit/rewrite at times. So yeah, based on this, I was confident to have a fun time editing Sisterhood when it came back from the letterer.

O boy, was I wrong! There were 250 edits needed, basically rewriting big parts, before I felt comfortable with the way I personally perceived an Optimal Debut Issue.

So then of course I was immensely up close and personal with the art and the story at this point, and I noticed a few slipups in the coloring. So you guessed it: it went back to the colorist, who at this point was also moving from Paris to Normandy, so I could not have planned this moment of clarity any better.

Again the waiting began, and then the next challenge came around the corner, because I had this idea that ‘just’ sending out the PDF to backers was not enough. No, sir, I wanted to take this opportunity for others in the business to basically have their advertisement, their samples, their comics and products shown as well. To me, this is the reason why I am in comics: to help promote this amazing medium in any which way I can.

So I now have this PDF and it even grew into 170+ pages. Does it dilute my own comic? Does it make my own chances less? I personally do not think so, since it gives potential public the chance to perhaps see new exciting fun stuff. Period.

In the period next I learned a lot about print, about paper and what not. Why it is best to have RGB-files for on screen, but to work with CMYK for print and how to work with programs like Indesign, Acrobat and Photoshop to accomplish all of this. All the while listening to the great advice of Story Continuity Editor (and artist to Sisterhood #2) Markus Von Renthe-Fink and realizing he has been saying most of what I learned months ago, warning me about pitfalls before I even realized there would be pitfalls. The respect I have earned these last few months to the people creating magazines, comics and all things print is staggering.

And I am sure I will update this post/column to also combine the next step in life: shipping it all out!

As they say in Dutch “I am going to re-invent the wheel all over again” most probably. But it is for my dream, my legacy and for myself and the whole team involved. We want to shine!

And then shine on the next book and the upcoming statue and boardgame! I have more ideas then time, so it seems, but I am truly glad I do not have this burden on my own, that is for sure.

Respect. To all the folks that are so skilled and motivated and talented to do this on their own.

Respect. To all folks in the comic business and to the backers and buyers. I love you all!