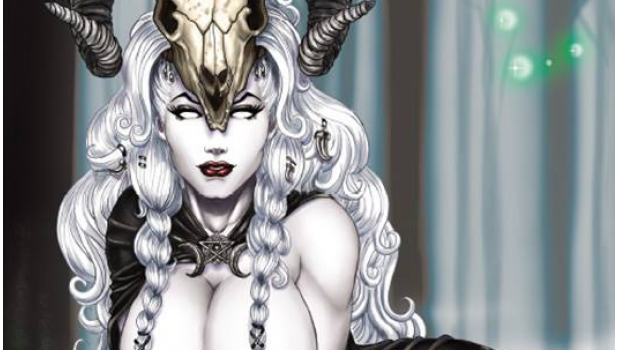 Herr Reich, a rogue Nazi scientist has kidnapped Jake the last innocent in Hell because he suspects he is the key to enacting his master plan and conquering Hell. But Lady Death ain’t having it. Aided by Haxan and Hellrider, the diva of death plans to rescue Jake and dismantle everything Reich hold dear. But – is it even possible? Has Lady Death met finally met her match? The answer will surprise you! Featuring the sadistic Frau Helga and re-introducing: Eldritch princess Caprice and her sidekick Char, Thanatos, demon lord of Hell, Wargoth of the Everkind and newcomers Steelheart and Mr. Atticus Marrow. Wait. These characters are from alternative timelines! What is up? You gotta read to find out!

“It’s Lady Death versus a psycho Nazi scientist in Hell,” says Lady Death creator Brian Pulido. “I think that pretty much says it all. Like the title, Merciless Onslaught, expect plenty of carnage and mayhem!”

Over 20 individual reward tiers containing a wide assortment of books, prints and collectible trading cards will be available to backers on the Merciless Onslaught #1 Kickstarter campaign, which will include several limited editions exclusive to the campaign. An all-star lineup of cover artists have joined the project to lend their talents, including Paolo Pantalena, Billy Tucci, Mike Krome, Sabine Rich, Jenevieve Broomall, Ula Mos, and many more to announce!