Liefeld’s AVENGELYNE Picked Up For Movie By Paramount 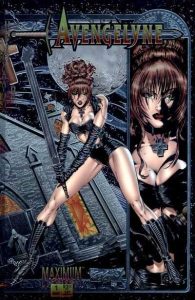 According to sources over at Deadline, the 90’s comic book series Avengelyne, created by Rob Liefeld and model Cathy Christian, is set to be a Paramount movie.

QUOTE: Paramount has made a preemptive film rights deal for Avengelyne, with Akiva Goldsman producing with an eye toward directing a thriller revolving around a heroine hatched by Deadpool creator Rob Liefeld. Goldsman, who is currently overseeing the Hasbro movies for Paramount after overseeing the Transformers writer room for the studio, will head the search for a screenwriter to draft a movie that is being called John Wick with a fallen angel. Deal was mid against high six figures for the rights.

Basically Avengelyne is a former angel who was cast out of heaven and now fights demons and monsters on Earth. What set out the comic book series was the innocence of the character, while doing battle with demons on earth. The visual tapestry of artist John Stinsman (and inkers Danny Miki and Jon Sibal) with colorist Nathan Lumm made it for one of the most popular titles of that era!

The first comic was published in 1995 by Maximum Press, with new issues coming out via Avatar Press, Awesome Comics and Image Comics.

Avengelyne is an angel of the one true God, Jehovah, known to her and the other angels as the Lord of Hosts. She was created from light, known as the white fire, the source of an angels divine power. Being an angel, she felt no pain or other ‘human’ senses and endured as long as God would allow it. Avengelyne is a Seraph and belongs to the Warhost, God’s warrior angels whose host numbers in the hundreds of thousands.

Avengelyne is one of the most powerful Seraphs in the Warhost and one of God’s favorite angels. Along with the angel Micah, they became feared even to the demons of Hell. Once, Avengelyne stormed Pandemonium, the citadel of the Dragon (the Devil) on her own, killing tens of thousands of demons before having to retreat. As Seraph, Avengelyne was totally fearless and extremely powerful.

Micah, having bad intentions of his own, convinced Avengelyne to question God one day, since she was so highly favored. As faithful followers, they wondered why God favored the humans who constantly embraced the dragon. God was extremely angered by Avengelyne questioning his judgment and she was cast from Heaven to live among the humans as a mortal.

With all of her angelic powers gone except super strength, she soon felt the vulnerabilities and experiences of the human race. They overwhelmed her and she sought refuge at a Catholic church known as St. Augustine’s. Naked and scared, Avengelyne was taken in by Father Malory and Father Peter Clifton. (source: Comicvine)