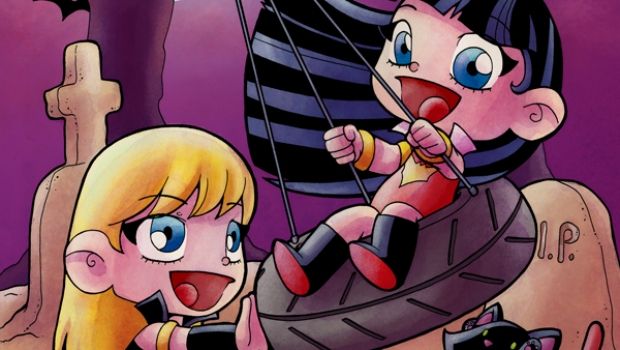 The search for Earth continues in this awesome epic event of tiny proportions! Who are the Cylons? Are they friends or foes? Does complaining to daddy Adama help or make things worse? Fear not, Apollo and Starbuck are here to save the day! Find out the answers to questions you’ve always wanted answered: How old do you have to be to ride a Colonial Viper? Is there a height requirement? What does Baltar have to say in all of this? And where do Baby Cylons come from? Come join the new and smaller adventures aboard the Battlestar Galactica! In-stores January 1, 2014.

Writer Franco says, “Dynamite – it’s explosive! Being able to work on a property like Battlestar Galactica is so awesome. It’s so much fun to be able to introduce a whole new generation of fans to characters we know so well… and Cylons! Who doesn’t love them? Well, everyone, but yes… we’ve got Cylons!”

Welcome to Stoker, Maine, the most normal, boring town in the world… or is it? There are sea serpents roaming the docks, a mummy in the town hall, and a gaggle of ghouls and goblins just devoured the breakfast cereal aisle at the local Shop-O-Mart! What is behind this monstrous rampage, and can it be stopped? When there are spooks afoot and arcane mysteries to be solved, it’s time for Vampirella, teen scourge of the supernatural, to crack the case! In-stores January 8, 2014.

Writer Eric Trautmann says, “There’s a real shortage of genuinely all-ages comics, something fun for adults as well as kids. So, when I was asked to cook up an all-ages Vampirella story, I jumped at the chance. I tend to work in darker territory in a lot of my work, so the opportunity to just cut loose and do some character-driven, humorous material is something I’ve wanted to do for a long time.”

Better! Stronger! Faster! …and smaller? Steve Austin and Jaime Sommers are the newest students at A.S.I. – the Academy of Science Intelligence, a school for the unique and gifted. They’re also both cyborgs, human kids with a variety of high-tech body parts and modifications. Can these two outsiders put aside their shyness and growing rivalry in time to take a stand against alien invaders who are determined to ruin the A.S.I. Track and Field Day? In-stores January 15, 2014.

Writer Brandon Jerwa says, “I’ve been writing comics for eleven years, and doing something for an all-ages audience has been a goal of mine since Day One. As soon as I saw Li’l Bionic Kids on the list of potential projects, I knew exactly what my pitch would be. I would love to see this ‘little’ experiment win over a whole new audience of young readers.”

Ernest Fairchild is the most evil kid on the block. Why, he never eats his vegetables, his library books are sometimes three weeks late, and he once xeroxed his own butt! Can Mister Smiley, his annoying yet strangely ineffectual conscience, make him change his ways? And are Daddy Fairchild’s blank eyes somehow related to his peculiar odor, rotting flesh, and appetite for human brains? Get a copy for yourself and one for the kids… it’s wall-to-wall zombie fun for all the family! In-stores January 22, 2014.

Writer Roger Langridge says, “It’s great to see Dynamite making an effort to expand its audience with a roster of kids’ comics. I’m delighted to be involved with any effort to reach younger readers – and, of course, I’m using my command of the craft and my sense of humor to try to appeal to older readers at the same time. Like all my kids’ comics, Li’l Ernie is written with one big kid in mind as its ideal audience: myself.”

Li’l Sonja is a warrior girl who travels the lands testing her mettle against monsters big and small, a younger and pluckier version of the famous She-Devil with a Sword. When Li’l Sonja encounters a town plagued by eccentric bandits, she needs to figure out the pattern behind the thefts and bring the baddies to justice. No task is too tough for our crimson-haired tyke! In-stores January 29, 2014.

Writer Jim Zub says, “Sword-and-sorcery storytelling is in my blood, and I’m excited to create a younger incarnation of fantasy’s best-known warrior woman. Over the past eight years, Dynamite has done a wonderful job at broadening the reach and scope of Red Sonja. Li’l Sonja is set to inspire younger readers just as much as the original has bonded with an adult audience.”

Assistant Editor Molly Mahan adds, “Since joining the DE family, Li’l Dynamites has been something I hinted at and whispered into everyone’s ear on a weekly, if not daily, basis. I’m excited to see what started, in a way, as my little joke come to pass – and at the start of our tenth anniversary. We’re putting together stories from some of the current biggest names in all-ages books, as well as rising stars. I hope fans have as much fun reading these stories as we have had working on them.”

Nick Barrucci, CEO and Publisher, shares his thoughts on the company’s first-ever five-week event: “What excitement we’ve had, bringing new voices to Dynamite with Roger Langridge, Art Baltazar, and Franco, and watching as established Dynamite writers like Brandon Jerwa, Eric Trautmann, and Jim Zub have taken this opportunity to stretch their writing muscles into an all-new, all-ages arena. It’s pure fun for everyone — wait ’til you see all our cool comics in January!”

All five of the Li’l Dynamites one-shot comics will be solicited in Diamond Comic Distributors’ November 2013 Previews catalog, the premiere source of merchandise for the comic book specialty market, and slated for release beginning in January 2014. Comic book fans are encouraged to reserve copies of Li’l Dynamites with their local comic book shop or hobby specialty store. The Li’l Dynamites titles will also be available for individual customer purchase through digital platforms courtesy of Comixology, iVerse, and Dark Horse Digital.